Serbia ready to solve all outstanding issues with Montenegro

Prime Minister Ana Brnabic voiced hope that after today’s visit of Prime Minister of Montenegro Dritan Abazovic to Belgrade, the relations between the two countries will be reset and that Serbia and Montenegro will enter an era of very good and best possible relations.

Speaking at a joint press conference with Abazovic, after the talks at the Palace of Serbia, Brnabic said that this is a very important visit for the realisation of that goal and underlined that both Serbia and Montenegro have no one closer in politics, the economy or in terms of closeness of citizens of the two countries.

We are connected by all forms of relations, but in last several years many open and difficult issues have accumulated, the Prime Minister said and added that Serbia will be open to solve all those open issues and improve political and economic relations.

The Prime Minister suggested Abazovic that Montenegro joins the Open Balkans initiative as soon as today.

She expressed the conviction that that would mean a lot in these turbulent times and contribute to greater security for citizens.

Brnabic said that the conversation with Abazovic was very concrete and that they defined the issues we need to resolve fast and which can directly and immediately influence the improvement of economic relations.

The Prime Minister said that for 12 years already there have been no direct payment operations between the two countries, but that they go through foreign intermediary banks.

That not only increases the cost of business operations, but also makes them more complicated. That is an issue that can be solved by our central banks, she said.

Brnabic added that this topic will be discussed today and tomorrow with the Governor of the National Bank of Serbia, in order to break the deadlock.

Other topics discussed were supply with food and energy products due to the current crisis, she said and reiterated that Serbia has enough food and that our partners in the region will have it too.

As for energy products, there is a huge potential for future cooperation, she said and added that projects between Serbia, Montenegro and Bosnia and Herzegovina in the hydro sector are especially interesting as there is huge potential there that we should use in order to increase energy capacity.

According to her, in the period from January to April this year we had trade exchange with Montenegro worth €307 million, which is 29 percent more than in the same period of 2021.

In 2022 trade exchange will exceed €1 billion. If we solve the issue of payment operations, we can easily exceed that figure. We want to be much closer politically and economically, Brnabic stated.

Abazovic said that it is a great honour for him that his first visit to the region is to Belgrade, and pointed out that he had come to turn a new page in relations between the two countries.

He said that the policy of his government will be the same with other neighbours, but that it is unnatural for two such historically connected and close countries to have noise in communication.

I feel that energy in Belgrade and that a new cycle has begun, which means that we are ready to approach all open issues in a responsible way and to close them for the benefit of the citizens of Serbia and Montenegro, the Montenegrin Prime Minister said.

We are going to solve the issue of payment operations because it is illogical that it has not worked for decades and that we must use international banks, which brings new costs in business, Abazovic pointed out.

He underlined that he received assurances in Belgrade that food would be delivered to Montenegro from Serbia without restrictions, which is a mitigating circumstance. 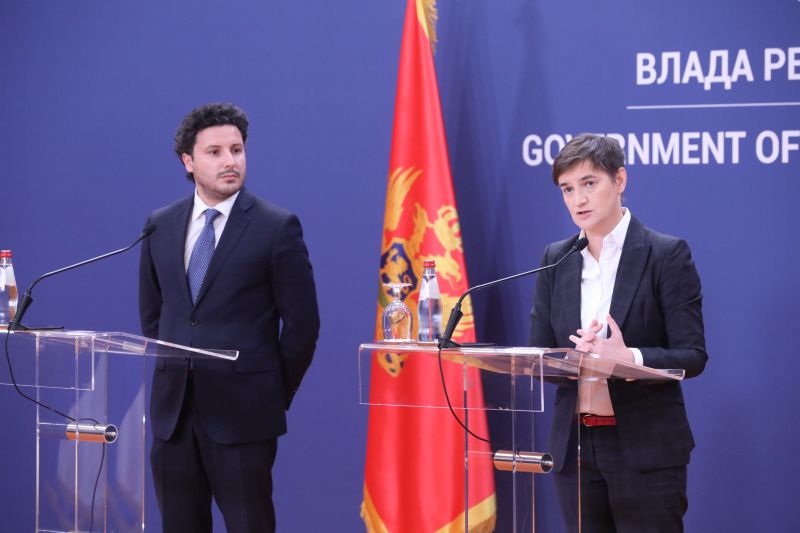