Serbia is second fastest growing economy in Europe in Q2

Prime Minister Ana Brnabic stated today that our country recorded a slight GDP growth of 0.1 percent in June, which, according to the flash estimate of the Ministry of Finance, ended the second quarter with a drop in GDP of 6.5 percent, which are much better results than we expected.

At the press conference dedicated to macroeconomic indicators in our country, Brnabic said that it is a great thing for the economy and citizens, since this result was achieved in extremely difficult circumstances when the whole world suffers and when many economies, including the strongest ones, have a decline of double-digit percentage.

She congratulated both the citizens and the economy on that result, asking them to continue the joint fight, in which the government will always be at their service.

Despite the crisis, Serbia has a stable number of employees in the second quarter of this year, and compared to the same period last year, there is an increase of 1.6 percent, the Prime Minister said, adding that she encourages how the labour market behaves, since this is the greatest crisis the world remembers.

According to her, the economy of Serbia in the first quarter was the fastest growing in Europe with a growth of five percent, followed by Ireland, Turkey, Romania, Montenegro, Lithuania.

In the second quarter of this year, as she pointed out, we are the second fastest growing economy in Europe, Lithuania was better than Serbia in that period, it had a smaller decline of 3.1 percent, and after us, Latvia with 9.6 percent.

Brnabic pointed out that it is clear from all this why this is good news and why we should be proud of the results, because it has been shown that responsible and hard work, discipline and faith in Serbia and the huge trust that foreign investors have, give it the right.

We have not had any cancellations of foreign direct investments and it is encouraging that in September and October we will have the laying of the foundation stone for new plants. All indicators show that, if we continue like this, we will have a good result, said the Prime Minister.

The survey conducted by PKS on the business activity of economic entities in Serbia showed that as many as 94 percent of the surveyed companies do not expect a reduction in the number of employees in the third quarter, the Prime Minister pointed out.

According to her, in that sense, the state has additional support programmes that are being worked on, including the program "My first salary", additional retraining, construction of regional training centres instead of training centres, as well as expanding the scope of seasonal employment reforms. has given excellent results in agriculture.

She added that the reform of seasonal employment is planned to include catering and tourism, construction and some other sectors. 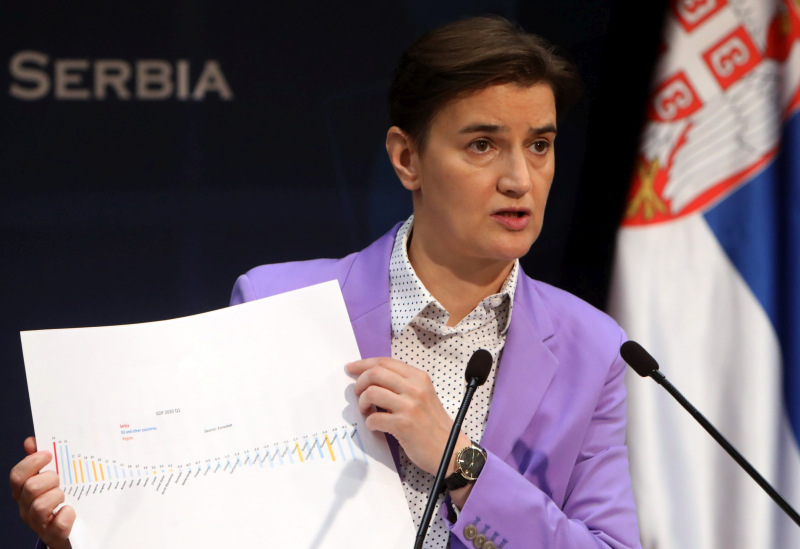