Belgrade to get Centre for Fourth Industrial Revolution

Prime Minister Ana Brnabic attended today in Geneva the signing of the Agreement on the Establishment of the World Economic Forum Centre for the Fourth Industrial Revolution in Serbia, the first of its kind in the Western Balkans.

The agreement was signed at the headquarters of that forum by Director of the Office for Information Technologies and eGovernment Mihailo Jovanovic and Managing Director and Head of the Forum's Centre for the Fourth Industrial Revolution Jeremy Jurgens.

The centre in Serbia will be the 16th in the network of centres of the World Economic Forum in the world and the first in the region of the Western Balkans.

The new centre will start operating on 1 March and will function as a non-profit organisation and a platform for public-private partnership and cooperation for the Fourth Industrial Revolution, while the focus of work will be on artificial intelligence and bioengineering.

This centre will work within the Serbian government’s Office for Information Technologies and eGovernment and will cooperate with scientific institutes, state institutions and the private sector.

Addressing the press, Brnabic pointed out that this agreement is the result of many years of joint work between Serbia and the World Economic Forum.

We started talking in 2018, signed a Memorandum of Understanding, then 2020 hampered us a bit, but we continued to plan in 2021 and here we are today, she said.

According to her, the centre will be focused on the development of artificial intelligence, biomedicine and biotechnology, and on the ways in which digitalisation can raise the productivity of companies and the entire economy.

This is what further leads to higher salaries, a better standard of living, as well as to an economy that is mainly based on knowledge, creativity and innovation, Brnabic emphasised.

Today, we have received great recognition for everything that Serbia has done in the field of digitalisation, development of high technologies and paradigm shift – from an economy that was based on labour-intensive investments to digital development.

That is why this agreement shows that Serbia has been recognised as one of the leaders in the economy and IT industry in the last six years, the Prime Minister pointed out and assessed that this is the announcement of the beginning of an even closer cooperation between Serbia and WEF.

She added that they will have a joint meeting with the 16 WEF centres for the fourth industrial revolution in the world every month, at which they will talk about what each of them is doing, since each has a different focus.

That is how we will hear what everyone is doing every month, learn from each other and I am sure that the centre in Belgrade will be one of the best, the Prime Minister said.

According to her, this gives us visibility, the opportunity to further establish Serbia as an investment destination, a country good for living and investing in new technologies and knowledge.

Jovanovic said that the ecosystem formed around the centre will use the infrastructure of the National Platform for the Development of Artificial Intelligence, the Centre for Genome Sequencing and the future bioeconomic centre – BIO4 Campus. 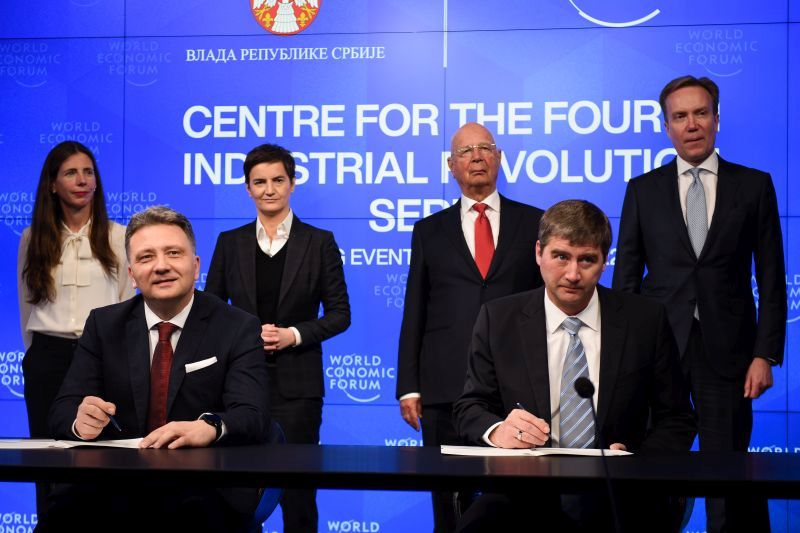