President of the Republic of Serbia Aleksandar Vucic stated today, opening a commemorative summit on the occasion of the 60th anniversary of the Non-Aligned Movement, that international cooperation, while respecting fundamental principles, is the only path to human development and prosperity.

Vucic, who began his address at this gathering with the words "welcome home", pointed out that Belgrade was, is and will be a proud host to every human being who carries peace within himself.

I hope that we will not only talk about the past, but also about the future that we want to build together. The world of dialogue, compromise and peace is still possible and achievable, the President of the Republic said.

Vucic pointed out that the UN Sustainable Development Agenda 2030 promotes three principles – peace and security, development and human rights, adding that Serbia, as the legal successor of Yugoslavia, the founder of the United Nations and the Non-Aligned Movement, is a proud promoter of multilateralism and respect for international norms.

According to him, marking the anniversary of the first conference of the Non-Aligned Movement represents a desire to pay tribute to this movement, which made a significant contribution and a vision based on respect during the bloc divisions, noting that there was no room for domination of one state over another.

The President of the Republic said that the right to decide one's own destiny is not a sin, but a right that must belong to everyone, regardless of the strength and power at its disposal.

Vucic assessed that the world today is different in relation to the one from 1961, because globalisation, interdependence and the development of new technologies have made the planet smaller, achieving an impact on everyone's lives.

At the same time, the challenges we face know no boundaries, and their nature is more complex. That is why we need to work more than ever on the development of multilateralism, because no country is isolated, no country is an island for itself, and cooperation is the only way to prosperity, he pointed out.

According to him, that is the basis on which, despite the differences, the members of the Movement stand, which is a symbol of the freedom-loving part of the world, ready to fight for freedom, independence and sovereignty.

The President of the Republic emphasized that Serbia knows best how difficult it is, because it is fighting to preserve its sovereignty and territorial integrity and resolve the issue of Kosovo and Metohija.

Vucic pointed out that Serbia's defense defends the universal principles on which the UN Charter is based, the principles of international law, but also some of the most important values ​​of the Movement.

As he emphasised, Serbia, as the successor of the SFRY, has never stopped striving to strengthen cooperation with traditional friends around the world.

The summit is jointly organised by Serbia and Azerbaijan. The participants were addressed by a video link by President of Azerbaijan Ilham Aliyev, who said that the country would strengthen cooperation within the Movement in order to strengthen justice and respect for international law.

The gathering is attended by delegations of members of the Non-Aligned Movement from more than 105 countries and numerous international organizations, and is attended by approximately 50 heads of state, government and foreign ministers. 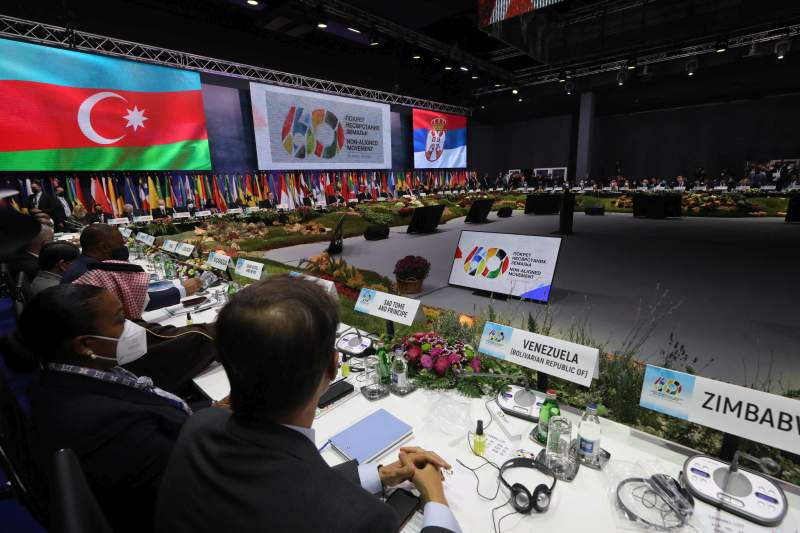