Minister of Trade, Tourism and Telecommunications Tatjana Matic and Ambassador of the United Kingdom to Serbia Sian Macleod signed the Partnership, Trade and Cooperation Agreement between the Republic of Serbia and the United Kingdom at the Palace of Serbia.

The agreement sets a new legal basis for regulating bilateral trade, which was previously defined by the Stabilisation and Association Agreement between the European Community and the member states and the Republic of Serbia.

Matic pointed out that the Agreement maintains the level of cooperation in all areas, as well as the degree of trade liberalisation that existed until 31 December 2020.

The conclusion of the agreement not only enabled the return to normal trade flows and created conditions for further growth of mutual trade in the interest of both countries, as well as for further investments, but also additionally strengthened the traditionally good relations of our countries, Matic said.

She expressed the expectation that with the successful implementation of immunisation against COVID-19, the previously highly developed tourist cooperation between the two countries will be renewed.

On this occasion, the Minister especially thanked the United Kingdom for the development assistance it provided to the Republic of Serbia in the previous period.

Ambassador Macleod pointed out that with the personal support of Prime Minister of the United Kingdom Boris Johnson and President of Serbia Aleksandar Vucic, the United Kingdom and Serbia are working together to build stronger, future-oriented relations, and increasing trade and investment are an important part of that ambition.

At the same time, this agreement confirms our common commitment to bilateral relations and regulates unhindered trade in a practical way, in the interest of business people and consumers in both our countries. I would like to congratulate the negotiators in both capitals on the efforts they have made. I look forward to the entry into force of this agreement, after all parliamentary procedures have been completed. I am also looking forward to an even larger number of British companies and experts who will give additional impetus to the economic development and progress of Serbia, said the Ambassador of the United Kingdom.

The United Kingdom and Serbia signed the first temporary bilateral trade agreement in March 1879, according to a statement from the Ministry of Trade, Tourism and Telecommunications. 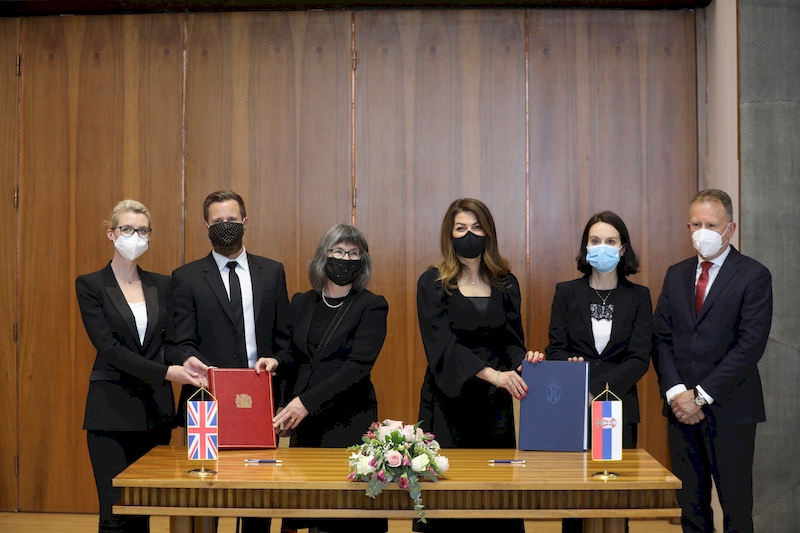