President of Serbia Aleksandar Vucic opened this morning, shortly after six o'clock, in Gospodjinci near Zabalj, a new gas pipeline in Serbia, "Balkan Stream", from the Bulgarian to the Hungarian border.

He announced that in 10 or 15 days, proposals will be made for a significant reduction in the price of gas connections for households in Serbia.

Gas has been flowing through our country since this morning through the "Balkan Stream". Serbia received another direction of supply, the President pointed out and congratulated the contractors on the successfully completed work.

This is a big and important thing for us, he said and emphasised that Serbia provided energy stability and security with the "Balkan Stream" gas pipeline, which is important for attracting new investors.

Vucic stated that gas is distributed from that place through the system of primary and secondary gas pipeline.

According to him, we procure gas through that gas pipeline at a price of up to $155, with much lower transport costs, than through another gas pipeline through which we have been supplied so far.

He reminded that an additional $30 was charged for the delivery of gas through Ukraine and Hungary to Serbia, plus $18 for transportation across our territory.

We spent $48 on that alone. And now it will cost $12-14. These are significant savings. Strategically, this is very important for us, the President repeated.

Vucic said that with this gas we provide energy security and get the opportunity to attract additional investors, and announced that the gas will be brought to many more municipalities where it is not available, which will additionally attract everyone who wants to open factories.

We still have a lot of work to do, but this guarantees a more certain and better future. I don't know how it will go between Russia and Ukraine regarding the trade agreement, but Serbia, with the help of Russian partners, managed to secure the supply of its territory, the President of Serbia explained.

This morning, at exactly six o'clock, the gas started from Bulgaria and entered the newly built Serbian gas pipeline. Through the gas pipeline through Serbia, the gas will go to Hungary and BiH, and there is a possibility to connect with other countries in the region.

The construction and commissioning of the "Balkan Stream", a part of the "Turkish Stream" gas pipeline, from the Bulgarian to the Hungarian border, has completely ensured the energy stability and security of Serbia. 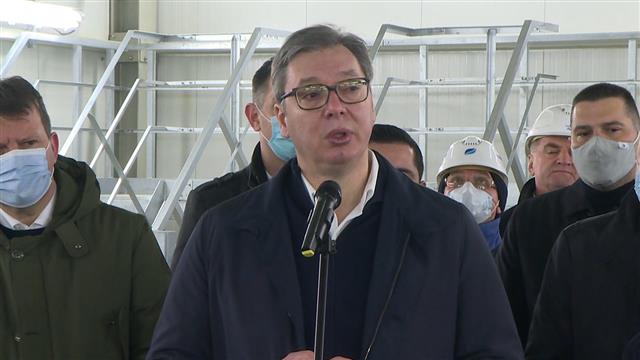