Prime Minister-designate Ana Brnabic said today that, through all the challenges ahead of us, we must lead and protect Serbia as an essentially free, independent and sovereign state on the European path – both politically and in terms of values, but keeping its friendly relations with Russia, China and all our other partners and building better relations with the United States.

In her key note address at a session of the Assembly of Serbia, where she presented the makeup of the new government, Brnabic pointed out that Serbia has ceased to be a country that is experiencing historical defeats and has become a country that wins.

She pointed out that this government will have six goals, namely: the fight against COVID-19 and strengthening our health, preserving the vital interests of the Serbian people in Kosovo and Metohija, fighting organised crime and a comprehensive war against the mafia, preserving independence and independent decision-making Serbia, the rule of law and the acceleration of reforms on our European path and further economic strengthening of Serbia.

She said that it will be an absolute priority for this government to complete the health infrastructure projects that have been launched and start new ones and added that the correctness of investing in health infrastructure was shown when the whole world faced the coronavirus pandemic against which Serbia is fighting more successfully than the richer and more developed countries of the world.

In addition to these two serious challenges, we are facing a serious and difficult fight against organised crime – the mafia. The victory over organised crime will require the participation of all branches of government, and above all the judiciary.

She added that in addition to specific infrastructure projects, we must continue to change things in our country in order to continue further economic strengthening of Serbia, we must increase the overall productivity of our companies, which is currently relatively low compared to the EU average.

In terms of strengthening human capacities, one of the key priorities of the government of Serbia will remain education. From April next year, Serbia will have a unique education information system for the first time, the Prime Minister-designate emphasised.

In the coming period, we will additionally support the development of preschool education by increasing investments in kindergartens, equipping preschool institutions and supporting professional staff, and we have important tasks ahead of us – to introduce dual education at higher education institutions and complete a new education strategy.

It is extremely important that we work on improving the telecommunications infrastructure in Serbia. We must build "digital roads", ie ensure that every village and every household in Serbia has fast and quality internet.

We must also support companies engaged in research and development, register patents and engage in innovation, and analyse what additional support is needed for their further development.

According to the Prime Minister-designate, we must find a way to connect our science with our economy more efficiently and thus raise productivity and competitiveness.

One of our greatest chances is to make a step forward in the food production chain towards products with a higher degree of finalisation and to transform ourselves from an exporter of agricultural products to an exporter of food and finished products.

She said that the new government will continue to invest in preserving cultural and archaeological heritage and easing working conditions with a focus on individuals - independent and freelance artists - whose status we will finally resolve after decades.

Regarding the energy sector, the realisation of planned investments in the energy infrastructure, raising the air quality and reducing the emissions of harmful gases and the greenhouse effect are goals of special importance for our country. We will continue to modernise the electricity infrastructure; we will complete the construction of the main gas pipeline from the border with Bulgaria to the border with Hungary (the so-called "Turkish Stream"); we will start the construction of a gas interconnection between Serbia and Bulgaria and we will work on expanding the capacity of the underground gas storage in Banatski Dvor, Brnabic emphasised.

The mining sector will remain an important element in Serbia's economic development, and a special focus will be on the realisation of the Jadar project, which represents a great opportunity for our country, bearing in mind that Loznica has a deposit of newly discovered lithium borate mineral, jadarite.

Brnabic pointed out that the most serious reform that awaits us is the introduction of pay grades in the state administration.

We have to finish this and thus enable everyone in the state administration who work on the same job and with the same responsibilities to be paid equally, and not that their salaries depend on where and in which state institution they work, she explained.

Also, we need to work faster on a reform of public enterprises. This is a demanding process that we have already entered into with the support of partners such as the World Bank, European Bank for Reconstruction and Development (EBRD) and the International Monetary Fund (IMF). This reform will not only help the budget, but will significantly increase the competitiveness of our economy.

The Prime Minister-designate pointed out that one of the priority tasks is to further amend the Law on Financial Support to Families with Children.

We also plan to work on solving the housing issue for young married couples, subsidising kindergartens and allocating funds for a richer network of preschool institutions through a partnership with employers that enables the harmonisation of work and parenthood.

She said that the future government will continue to support changes to the Constitution in the field of justice in order to find the best solutions for our legal system.

The future government of Serbia will have 21 departments and two ministers without portfolios, with six completely new ministers and as many as 11 women ministers who will lead some of the most complex departments in the government, Brnabic underlined. 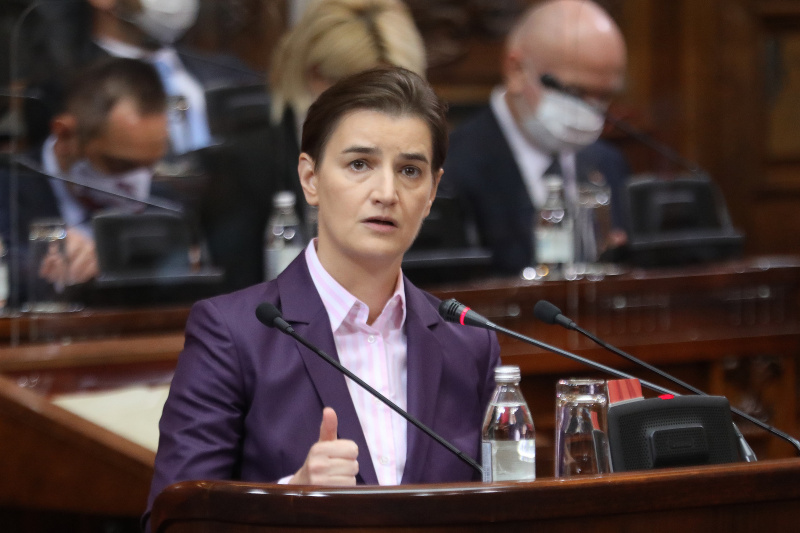