Minister of Finance Sinisa Mali said today that Serbia has achieved good economic results, which are a crown of the reforms that have been implemented since 2014.

Speaking at a press conference on the occasion of the second review of the arrangement of Serbia and the International Monetary Fund "The Policy Coordination Instrument", Mali recalled that the current arrangement was signed in July 2018 and will last until January 2021.

He said that, according to a report by the World Bank and the IMF, Serbia will be the carrier of economic growth in the region until 2023, adding that our GDP will increase by 20 percent in the next four years.

The Minister pointed out that during the visit of the IMF delegation to Serbia, the previously projected GDP growth rate of Serbia of 3.5 percent for 2019 and four percent for 2020 has been confirmed.

He expressed expectation that until next IMF visit in October, Serbia will have an agreed and harmonised set of new fiscal rules, and that a fiscal strategy for the coming year will be published in June.

Mali also said that he expects full implementation of the new salary system from mid-2020, after the adoption of the Decree on the coefficients for calculation and payment of salaries of public sector employees.

He recalled that the Law on the method of determining the maximum number of employees in the public sector expires at the end of this year, and added that the new framework should enable greater flexibility in employment in the public sector, in accordance with the defined human resources plans, but not at the expense of the hardly achieved results of fiscal consolidation.

Head of the IMF Mission Jan Kees Martijn pointed out that Serbia's economic growth is strong, that public debt is falling, and that inflation is low and stable, and that many key reforms have been implemented.

It is expected that strong wage growth will support consumption, but domestic demand could be lower if the expected investments are not implemented, Martijn said.

Governor of the National Bank of Serbia (NBS) Jorgovanka Tabakovic said that an agreement was reached that the NBS will continue to work as it has done so far, ensuring low and stable inflation, so that the environment for domestic and foreign investment is predictable.

She pointed out that the fact that there are 230,000 more employees in the private sector in relation to five years ago is proof of everything that is being done in fiscal and monetary policy. 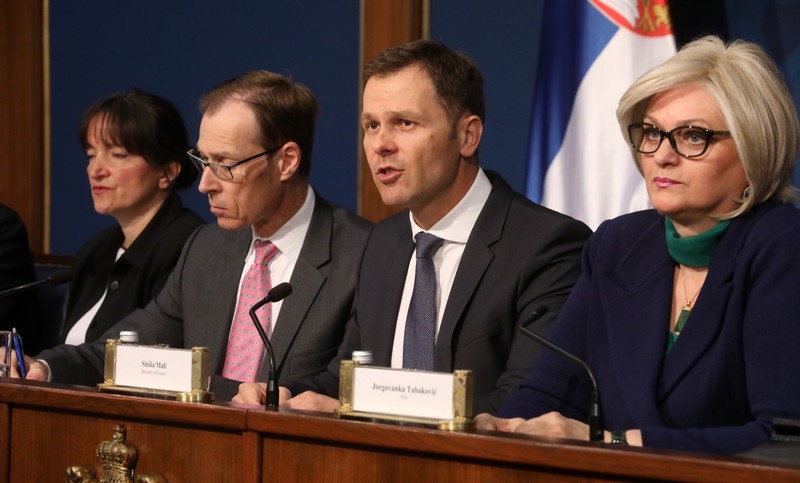