The Ministry of Culture and Information stated today that the fake care of the interim institutions in Pristina for cultural heritage, which they are trying to usurp and appropriate as the heritage of a non-existent state, is shown the best through persistent denial of the endangerment of the Visoki Decani monastery.

According to a statement by the Ministry, the endangerment of this monastery is obvious and it has been confirmed in a report of the Europa Nostra organisation.

In the previous period, the interim institutions in Pristina not only did nothing to reduce the level of endangerment of the monastery, but are still refusing to implement the decision, even of their own institutions, which confirms that 24 hectares of the land belong to the monastery.

Also, the monastery is additionally endangered by the construction of a road through the protected zone of this religious site.

Denying all these facts, Pristina continues with meaningless demands for the “return” of cultural heritage, which is nothing but the continuation of a campaign of usurping cultural heritage and abusing it for the creation of a non-existent statehood and cultural identity of the so-called “Kosovo”.

Such a form of manipulation is particularly obvious when a long history of desecration, destruction, endangerment and the attempts at seizing Serbian cultural heritage in Kosovo and Metohija is taken into account.

For decades, our cultural treasure in Kosovo and Metohija has been exposed to various forms of violence and threats, open assaults and physical destruction, as well as to daily campaigns and pressures, attempts to erase and falsify, which will obviously not change given the politics of Pristina.

Due to the unstable security situation in Kosovo and Metohija in 2006, Gracanica, Visoki Decani, the Patriarchate of Pec and the Church of the Virgin of Ljevis were inscribed on the List of World Heritage in Danger.

The Ministry of Culture and Information again expresses full commitment to the protection of Serbian cultural heritage and cultural values from usurpation, forgery and all other forms of violence. 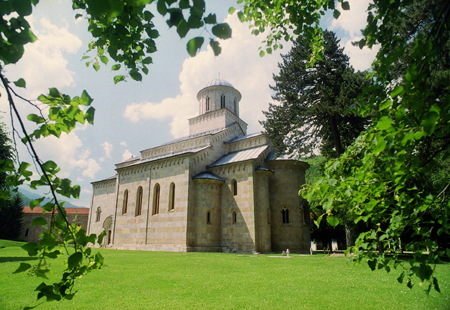