President of the Republic of Serbia Aleksandar Vucic stated today that our country, despite the results of opinion polls on citizens’ view of the membership in the EU, will continue even more strongly on its European path.

In his address to the public, Vucic said that the first point of his speech, which is divided in ten points, will be the European path.

Explaining the reasons why Serbia will be even stronger on the European path, Vucic said that the greatest number of investments in Serbia come from the EU, along a huge level of trade with the EU and its Member States.

The President stated that the trade exchange of Serbia with the EU stands at approximately 60.2 percent or €30.8 billion, of which trade with Germany alone accounts for 13 percent.

Also, 300,000 people in Serbia are directly or indirectly employed in companies or service and financial centres belonging to EU Member States.

At the same time, the greatest part of investments in Serbia come from the EU – last year it was €1.93 billion, and the year before €1.84 billion, which is more than what many EU Member States had.

Speaking about point two, the President warned that Serbia will be under much greater pressure to recognise the independence of Kosovo and Metohija in the upcoming period, so that the West could prove to Moscow that this case is not similar to Donbas in Ukraine.

According to him, the Russian leader did not have a special intention to harm Serbia, but he wanted to protect his own interests, finding a political and legal basis for the invasion of Ukraine, which he justifies by decisions of the International Court of Justice and precedents made by Western countries in the territory of Serbia.

Vucic said that Putin's argument is not weak, stating that Serbia is getting into trouble because the entire West will ask Belgrade to quickly move towards recognising the independence of Kosovo and Metohija.

He said that all European leaders told him that Putin insisted on the Kosovo case in their talks. That does not mean that Russia will recognise Kosovo, but we will be under great pressure so that Putin could not be able to use Kosovo as an argument.

Also, dialogue with Pristina is almost non-existent, Vucic pointed out and added that his meeting with Kosovo Prime Minister Albin Kurti in Berlin this week was just an attempt at dialogue, because Pristina representatives did not want dialogue at any moment.

The President of the Republic stated that fuel in Serbia will be RSD 10 cheaper from tonight.

In line with point four, which referred to finances, Vucic confirmed that Serbia's public finances are stable, that public debt amounts to 52.4 percent of gross domestic product (GDP) despite the fact that Serbia pays a high price for not imposing sanctions on Russia.

In point five of his address, Vucic said that commodity reserves are full and that we have large quantities of almost all food products.

Speaking about point six, which refers to the new energy policy, the President said that Serbia had sent a request to its Norwegian friends to participate together with us in the development of a new energy policy strategy.

In point seven he announced that if there are no major problems in the coming period, there will be increases in salaries and pensions, adding that he will ask the IMF and the World Bank to move the Swiss formula for calculating pensions in times of crisis, so that the increase in pensions could be fully aligned with salary increases.

Explaining point eight, the President of the Republic underlined that Serbia will remain militarily neutral, and made a proposal to introduce a mandatory military service of 90 days in the coming period.

In point nine, Vucic announced that for the next budget, the government will prepare additional measures for families with children, especially single mothers, in order to help increase the birth rate.

The President ended his speech with point ten, in which he reiterated that Serbia must continue on the European path, because without European investments and the political and legal framework, we would not be able to achieve anything.

On the third day of the conflict in Ukraine we came out with a policy on that, and we are keeping it to this day, which shows that it was with a view to the future. Serbia will not trample and extinguish friendships in the East, regardless of pressures, Vucic concluded. 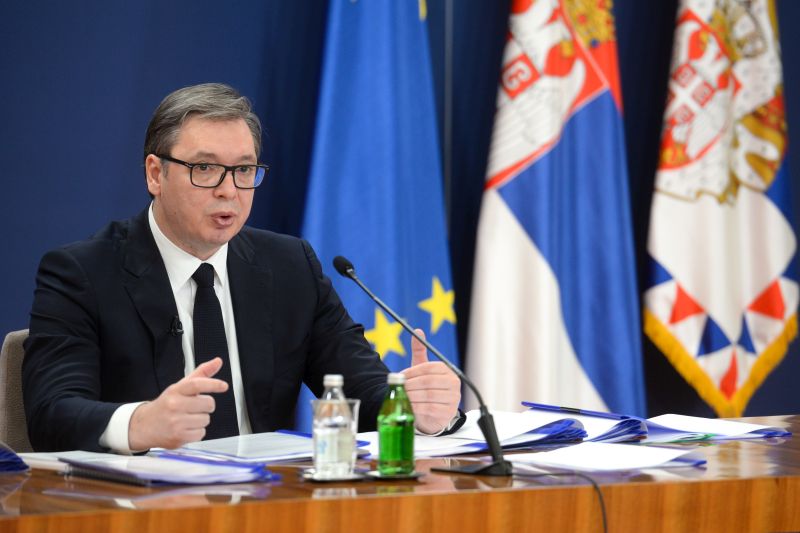