Prime Minister Ana Brnabic, together with Minister of European Integration and Chief Negotiator Jadranka Joksimovic, met today with Head of the EU Delegation to Serbia Emanuele Giaufret and the ambassadors of the EU Member States.

The topics of the meeting were 2021 EU Enlargement Package and in particular the Report of the European Commission on Serbia for this year, as well as the next steps in the process of accession to the EU.

She underlined that Serbia has continuous communication with the Delegation of the EU and all Member States and that it speaks openly about further reforms, first and foremost in the field of the rule of law.

The Prime Minister assessed that this year’s Report on the progress of Serbia gives an objective evaluation of everything the Serbian government has achieved on speeding up the political and economic reforms, by which one of the strategic priorities has been fulfilled.

According to Brnabic, it is of particular importance that the European Commission has given a clear recommendation that Serbia reached the criteria necessary for opening two clusters of chapters.

Today we have an opportunity to present to you, as representatives of the EU and EU Member States, additional information on the adoption and implementation of all necessary reforms, the Prime Minister stated.

For this reason, it is important that this meeting is being held immediately after the release of the European Commission’s Report and before the final decision of the Member States on whether they will support the opening of clusters, she said.

Brnabic voiced her hope that these additional explanations will contribute to Serbia obtaining consent for the formal continuation of negotiations by the end of this year.

She also underlined that the European Commission’s recommendation for the further opening of clusters is very important politically, not only as an incentive to the government to continue implementing its reform plans with motivation and responsibility, but also to the citizens of Serbia and all in the region, who in this way receive once more a clear confirmation on the perspective of membership in the EU.

The Prime Minister pointed out that Serbia wishes to make additional progress in all areas, especially in the field of the rule of law and that continuous communication with the Delegation of the EU in Serbia and all Member States is of particular importance to that end.

Joksimovic stated that the Report provides the necessary balance in the evaluation of everything Serbia has achieved in the previous period.

According to her, in some segments the implementation of reforms is faster, in some other somewhat slower, but progress has been noticed in all areas and is noted down in the Report itself.

She voiced hope that the general assessments from the European Commission, which speak in favour of honesty, dedication and capability of the Serbian government to implement policies which are important for the accession process in time of pandemic, will be a sufficient orientation for the Member States to agree on the further opening of clusters.

Ambassador Giaufret expressed gratitude to the Serbian government for convening this meeting with ambassadors of the EU Member States, describing it as a positive indication of Serbia’s dedication to strengthening dialogue on reforms for the sake of solving priorities and necessary activities identified in the yearly Report of the European Commission. 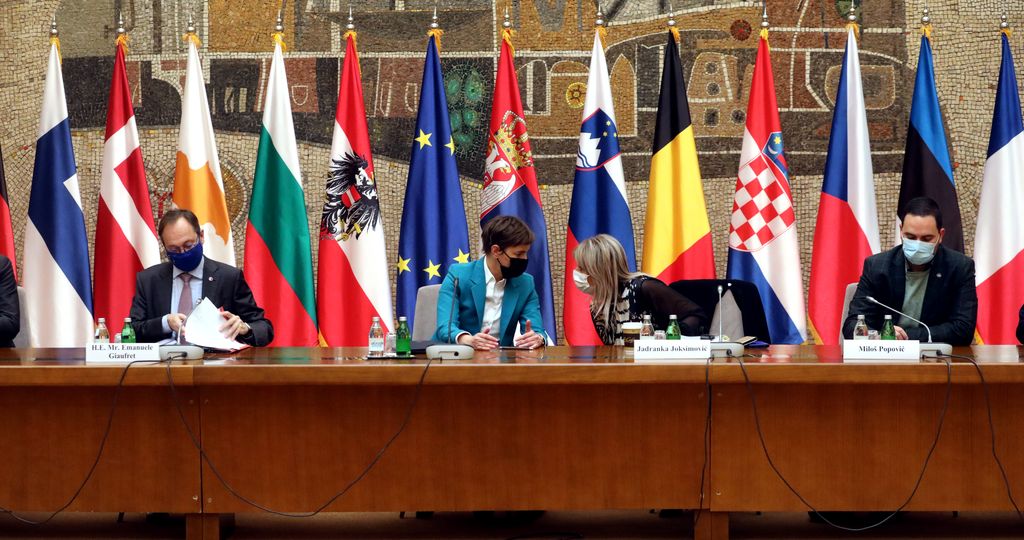