Serbia will not accept policy of fait accompli in Kosovo

President of the Republic of Serbia Aleksandar Vucic stated today that he rejected the proposal of the Quint countries and the European Union on what a compromise solution for the current situation in northern Kosovo should look like, noting that Serbia will not accept policy of fait accompli in Kosovo.

At a press conference after the session of the National Security Council, Vucic said that he received a proposal yesterday, and this morning in a conversation with Quint representatives, according to which 70 percent of what Albanians wanted to do on the administrative line would be forgotten, but that 20 to 30 percent of the new measures would be introduced.

I took responsibility for myself and rejected that proposal, because it is not a compromise, but a solution that would humiliate Serbia, he pointed out and added that the members of the National Security Council also supported his decision.

Vucic assessed that this is a criminal intention of the Pristina authorities and the sixth entry of ROSU to the north of the province without informing the mayors of four Serbian municipalities from this part of the province.

He said Serbia would continue to insist on preserving peace, stability and would not accept endangering the security of the Serb population.

According to him, the National Security Council requested the withdrawal of all troops from the north of Kosovo that Pristina sent, a return to the previous situation, and then everything to be discussed in Brussels.

The President of Serbia stated that the Council assessed as inappropriate statements in which Belgrade and Pristina are equated and the blame is shifted to both sides.

As he emphasised, Serbia is ready to continue the dialogue, but it will not accept the imposition of unilateral decisions by Pristina and that someone's criminal action gets the legitimization and seal of Serbia.

He announced that Serbia would consider measures against Pristina in the next few days.

We want to show good will and leave some time for Pristina to change their bad decisions, and if they do not want to, we will take measures to protect Serbia, Vucic pointed out. 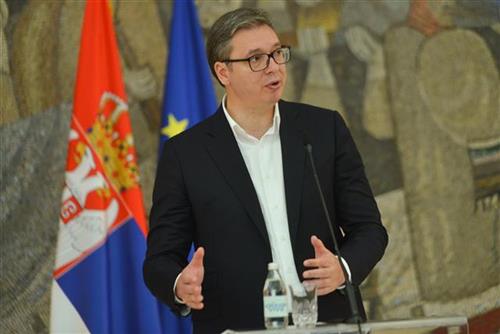