President of Serbia Aleksandar Vucic and Prime Minister Ana Brnabic participated tonight in a session of the UN Security Council, where a report of the International Residual Mechanism for Criminal Tribunals in The Hague was presented, and which was partially held via a video link due to the coronavirus pandemic.

During his address to the Security Council, Vucic stated that Serbia has several times raised the question of enabling the convicted citizens of Serbia to serve their sentences in our country.

The majority of people who serve their sentences are citizens of the Republic of Serbia, and it is natural for Serbia to be interested in them serving their time in prison in Serbia, said Vucic.

He pointed out that Serbia takes its obligations regarding the Mechanism seriously, but that the Higher Court in Belgrade concluded that the preconditions for the arrest of Petar Jojic and Vjerica Radeta were not fulfilled.

The decision is based on domestic law and international law, he said.

Vucic recalled that Serbia handed over all the accused persons to the Tribunal, including persons from the highest state authorities.

The Republic of Serbia has raised the question of enabling our convicted citizens to serve their sentences in Serbia. We have not received any answers at this session. It is natural for them to serve their sentences in Serbia. I want to underline the wish of Serbia that the execution of the sentences of the citizens of Serbia be in Serbia. Obligations under the Mechanism concern a serious breach. Serbia takes its obligations seriously. I would just like to remind you that the Republic of Serbia has handed over to the Tribunal all the persons indicted by the Prosecutor, and we also submitted documentation, the President of Serbia pointed out.

Vucic also reminded of the fact that France refused to extradite individuals due to contempt of the Court under the slogan that France does not extradite its citizens.

Many crimes committed against Serb civilians were not of interest, but it is very important that we do not leave anything unclear. It is interesting that, in addition to criticism, Serbia is the only one that condemns the crimes committed by the citizens of Serbia. Serbia condemns the horrific crime in Srebrenica. Nevertheless, we are here to analyse the results. The Hague tribunal tried only Serbs. Serbs were sentenced to 1130 years in prison, and to 7 life sentences, on the other hand, no Croats were sentenced. Gotovina was sentenced to 23 years in prison, but the verdict was later changed to acquittal. Also, Naser Oric was released. It turns out that none of them is responsible for those crimes, Vucic assessed.

He pointed out that Serbia will show responsibility and that it will fight for peace and stability in the region, and called on the Mechanism to respect Serbia and international law, and not to criminalise our country.

The Serbian President called on the UN Security Council to help in the neutral approach to international law.

We are turned to the future, not the past, despite the selective justice of the Hague Tribunal. And I have one message for all Serbs and Serbs in the entire region: "Heads up, neither Serbia nor the Serbian people were convicted for nothing, it is up to us to work even harder and open factories," Vucic concluded. 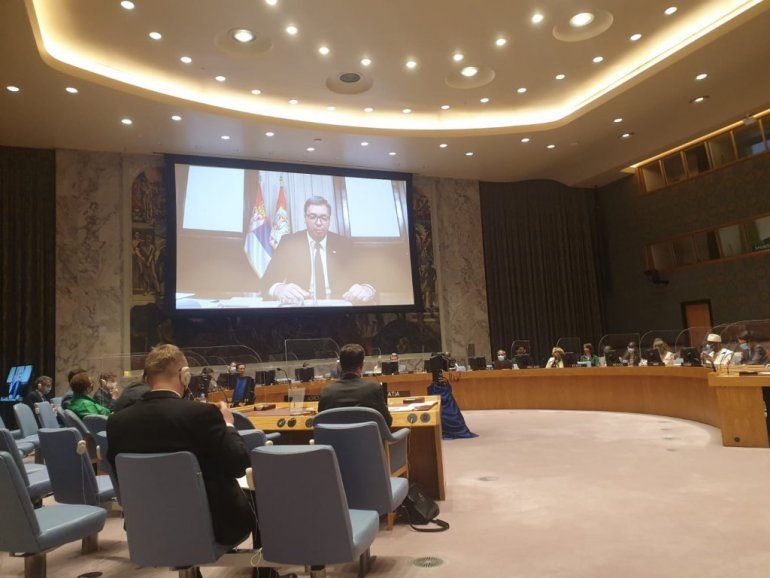