Italy important partner of Serbia in the process of European integration

Minister of Foreign Affairs Nikola Selakovic stated today in Rome that relations between Serbia and Italy can serve as an example of successful cooperation, and pointed out that our country sees Italy as an important partner in the European integration process.

He said that Italy has so far shown itself not only as a friend of the EU enlargement process, but also as one of its most vocal advocates.

During his official visit to Italy, Selakovic addressed the members of the Committee on Foreign and European Affairs of the House of Representatives, saying that the government of Serbia remains consistent in the implementation of its foreign policy priorities.

According to him, full membership in the EU is one of the key strategic goals, and Serbia's interest is to preserve good neighbourly relations and regional stability, as well as a just and peaceful solution to the issue of the southern Serbian province.

Also, as he conveyed, traditional relations with the Russian Federation and the People's Republic of China remain high on the list of priorities, as well as advocating for a new level of partnership with the United States.

The head of Serbian diplomacy pointed out that the previous year, in terms of the European perspective, was a year of challenges, estimating that the progress that Serbia deserved is missing.

Stating that our country has opened 18 of the 35 chapters and has accepted the new methodology of accession negotiations, he said that he expects that the new "cluster" method will be more efficient and will recognize the results achieved in all fields, especially in the field of the rule of law.

The Minister emphasised that the dialogue with Pristina is the most difficult and complex issue, and that solutions must be sought through a dialogue under the auspices of the EU, for which there is no alternative.

Selakovic said that Serbia, as before, would base its policy on a responsible and constructive approach and attitudes based on the principles of international law and UN Security Council Resolution 1244. 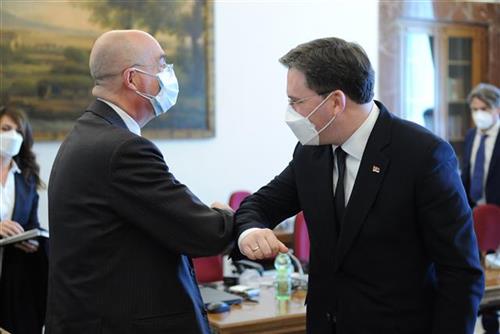