Speaking at a joint press conference after the meeting, Vucic stated that all aspects of comprehensive cooperation between Serbia and Republika Srpska were discussed.

The President said that one of the most important topics was the construction of an airport in Trebinje, where Serbia wants to be the owner and manager of that airport.

He added that Serbia and Republika Srpska decided to celebrate a joint holiday in the future – 15 September, which will be marked as the Day of Serbian Unity, Freedom and the National Flag.

The day chosen, 15 September, is the date of breakthrough of the Salonica front, he said and explained that this day will be celebrated in all the places around the world where the Serbs live.

The President also said that a plan was made today to form a joint industrial zone in the border area of Serbia and Bosnia-Herzegovina, and that our country will work together with Republika Srpska on the construction of 17 kilometres of the motorway from the bridge over the Sava at the border to Bijeljina.

A set of projects in the areas of education and culture was also agreed upon, Vucic said, some of them being the harmonisation of school curricula of the two countries and the organisation of excursions for children from Republika Srpska to Serbia and vice versa.

The President of Serbia added that a document that he had received from Republika Srpska was also discussed and reiterated that Serbia’s position is an absolute respect for the Dayton Accords.

Serbia respects the agreements it signed because that is a guarantee that we will be respected by everyone in the international community and is also the best guarantee of security of the people in Serbia and Republika Srpska, Vucic concluded. 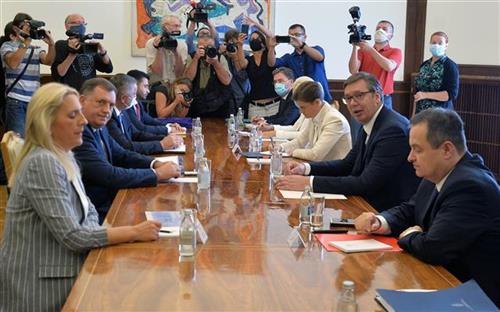