Prime Minister Ana Brnabic attended today, together with President of the Republic of Serbia Aleksandar Vucic, the opening of the Science and Technology Park Cacak.

In her address to the audience, Brnabic pointed out that the newly opened science and technology park is a new base for the development of that city.

Kragujevac is the next city that should get a science and technology park, but it is not just the NTP network, but the backbone of the development of the new Serbia, where young people will stay, where they will return and where young people from all over the world will come to work, Brnabic underlined.

She expressed gratitude to the President of Serbia for believing in the development and potential of digitalisation in Serbia, emphasising that what has been done in our country in the previous four years in terms of digitalisation has not been done anywhere in Europe.

Brnabic stated that the idea was to open science and technology parks in Belgrade, Nis and Novi Sad, and not in Cacak, but that the initial idea was changed thanks to the Cacak Faculty of Technical Sciences.

According to her, the Science and Technology Park in Cacak is different, primarily because it was created on the site of the former factory “Cer” which was destroyed during the 1999 NATO bombing, but also because it is based on "hardware" i.e. production, which gives added value to Serbia.

We wanted to show how factories rise from the ashes both after the bombing and after the destruction of the economy. That is why this park is so important, the Prime Minister underlined.

The government has reserved one more hall in order for that science and technology park to expand if new companies appear.

Brnabic stated that another building of the Faculty of Technical Sciences remains to be erected, which is important for both Cacak and Serbia.

The President of the Republic talked with young innovators from Cacak, who made 5,000 visors during the state of emergency, and told them that the state would help their projects as much as possible.

The young innovators pointed out that now in their city they have the opportunity to see new technologies and learn, while before they could do that only in Belgrade. 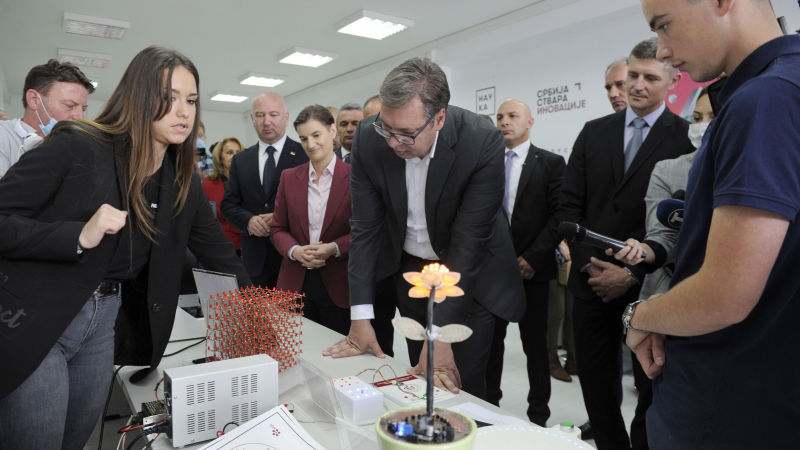