Serbia to experience rebirth by 2025

President of the Republic of Serbia Aleksandar Vucic said today at the presentation of the “Serbia 2025” programme that since 2014 the face of Serbia has been changed, as it is now a successful country that is making the fastest progress in Southeast Europe.

Vucic said that the increase in salaries and pensions would be one of the results of the new investment plan, which is worth a total of €14 billion, with an estimate that in 2025 it could amount to €17 billion.

According to him, the first goal of this plan is to fight for the young people to stay in the country, for which, in addition to the funds from the budget, a total of €700 million will be allocated.

He said that a total of €5.078 billion will be allocated for investments in the road infrastructure.

A little more than €3.5 billion will be invested in the railway infrastructure, and a number of approximately €1.3 billion is included in this figure.

Vucic said that €274 million will be invested in the water traffic investments, while funds for the continuation of air traffic development will be secured through the budget.

Speaking about the agriculture sector, the President specified that a total of €300 million will be invested for infrastructure in the area.

Funds from the programme “Serbia 2025 " will also be used for the Office of Kosovo-Metohija in the amount €150 million, which will be earmarked for infrastructure projects in the southern Serbian province, Vucic said.

He announced an additional €100 million for cooperation with the Republic of Serbia because it is our obligation to help connect Republika Srpska with the mother country, without endangering the territorial integrity of Bosnia-Herzegovina.

According to him, as part of the Progamme, €1 billion will be invested for construction of water supply and sewage in every village in Serbia, because it is of enormous importance to the life of citizens.

Also, large funds will be set aside for the development of the sports infrastructure, he said, noting that an additional €600 million will be invested in the next period in Serbian healthcare. 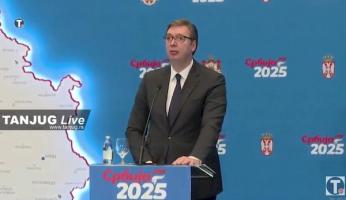