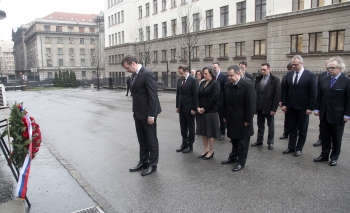 The wreath-laying ceremony was also attended by Minister of Economy Zeljko Sertic, Minister of Agriculture and Environmental Protection Snezana Bogosavljevic-Boskovic, Minister of Health Zlatibor Loncar, Minister of Culture and the Media Ivan Tasovac and Minister without Portfolio responsible for Emergency Situations Velimir Ilic.

The anniversary of the death of prime minister of Serbia and leader of the Democratic Party Zoran Djindjic, who was assassinated in 2003, will be marked today with a series of events.