Serbia will not give up fight for Kosovo and Metohija

President of the Republic of Serbia Aleksandar Vucic said today that Serbia will not recognise, directly or indirectly, the unilaterally proclaimed independence of its southern province, nor will it give up its legitimate struggle for its state and national interests and for respect for international law.

Speaking at a special session of the parliament, where he is presenting the Report on the negotiation process with the interim institutions of self-government in Pristina from 15 June 2021 to 1 September 2022, Vucic emphasised that responsible and realistic politics cannot rest on myths, and that we should find life in Kosovo and Metohija for the Serbs, and no less for the Albanians.

He assessed that it is a difficult task that we must complete in order to survive as a country and nation.

According to him, the essential crisis of the dialogue between Belgrade and Pristina and our biggest problem stems from the fact that the Western world does not want to respect the UN Charter and UN Security Council Resolution 1244.

Another problem, as he pointed out, is that the international community is not interested in honouring the signed agreements, nor in putting any pressure on Pristina.

The non-formation of the Community of Serb Municipalities created an atmosphere in which the position of Serbs continued to deteriorate, leading to a worrying situation in which attacks on their personal and property security are becoming more frequent, Vucic said.

He also stated that the presence of special forces of the Pristina police is increasing in the north of Kosovo and Metohija, and underlined that there is no artificial generation of the crisis on the Serbian side.

The danger is imminent, realistic and serious, and the representatives of the Serbian people and institutions from Kosovo and Metohija, who are attending today's session in the Serbian Parliament, can testify to that, the President said.

Despite everything, we were and remain consistently committed to dialogue, aware that peaceful resolution of the problem is the only reasonable way and that anything else, instead of stabilisation and de-escalation, leads us to instability and potential conflicts, the proportions of which can be catastrophic not only for the people of Kosovo and Metohija, but also for the whole of Serbia, Vucic underlined. 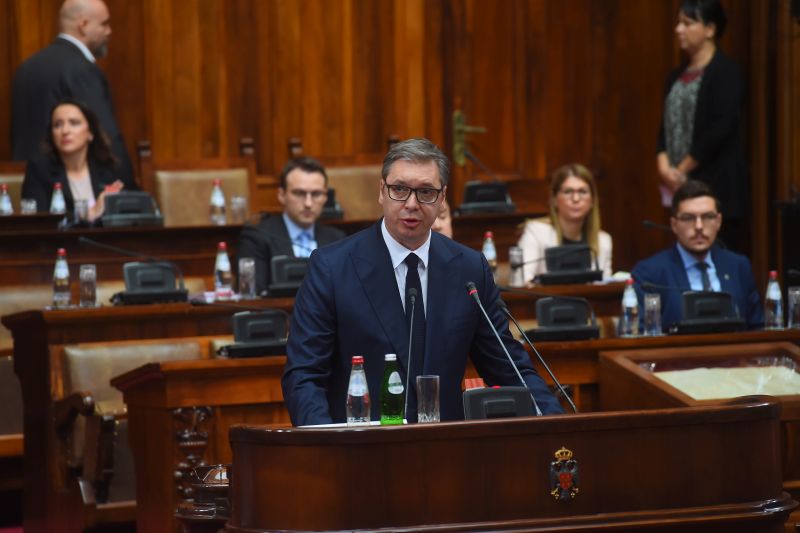