We will save our people in Kosovo from pogrom and persecution

President of the Republic of Serbia Aleksandar Vucic said today in his address to the citizens of Serbia, after the latest round of talks in Brussels at the highest level, that we have been put in a difficult situation, but that there will be no lines of Serb refugees from Kosovo and Metohija and that we will protect our people in the province from pogrom and persecution, if NATO does not want to do it.

Recalling at the beginning of his speech that permanent terror has been carried out against the Serbian population in Kosovo and Metohija since 1999, Vucic explained to the citizens what happened in Brussels, what awaits us, what we can do and what we will do about it.

He said that the delegation of Belgrade, in the continuation of talks with Pristina, had four tasks.

We did everything in our power to preserve peace, stability, safety and security, we had to avoid the general condemnation of the West against Serbia - that we were not open enough to compromise, that we did not come up with ideas and proposals on how to reach a compromise, explained Vucic.

We also had to worry about how it will look in all parts of the world, whether we will be declared as someone who carries out aggression, leads to instability and insecurity, or will we give more than possible so that it could be seen that the other side is the one who wants nothing, but leads to instability, unrest, conflict and war.

According to him, the fourth task is to ensure the survival of our people in Kosovo and Metohija.

On the other hand, he underlined, the Albanians in Kosovo and Metohija have two goals, namely the abolition of anything that has to do with the Serbian state and the final persecution and expulsion of the Serbian population from the province, which is why Albin Kurti and the Albanian side rejected all the proposals of our delegation in Brussels.

He said that our side agreed to issue whatever papers they want for Serbs from central Serbia, but that they cannot issue those papers to Serbs from Kosovo and Metohija, because they are not the other side, nor are they in transit.

The President said that our side was interested in making an agreement, almost at any cost, so that nobody's life in Kosovo and Metohija is endangered, but that Pristina did not want to accept it.

Vucic stated that the delegation of Pristina in Brussels offered to discuss the so-called general agreement, which contains six points:

He called on NATO to end the incursions of special Kosovo units in the north of the province and to start implementing the agreements they themselves signed, saying that NATO Secretary General Jens Stoltenberg confirmed that there is a clear agreement on movements towards the north, which Pristina has repeatedly violated.

The President also said that Chief of the General Staff of the Serbian Army Milan Mojsilovic spoke today with the KFOR commander, to whom he told that their job is to prevent the arrival of special Kosovo units in the north.

According to him, the situation is very difficult, but in the next 10 days we will frantically search for a compromise and I hope we will succeed.

He added that after today's meeting, the representatives of the Serbs supported the leadership of Serbia in seeking a compromise solution, and underlined that they asked for and received guarantees that the pogrom and expulsion of the Serbs would not happen. 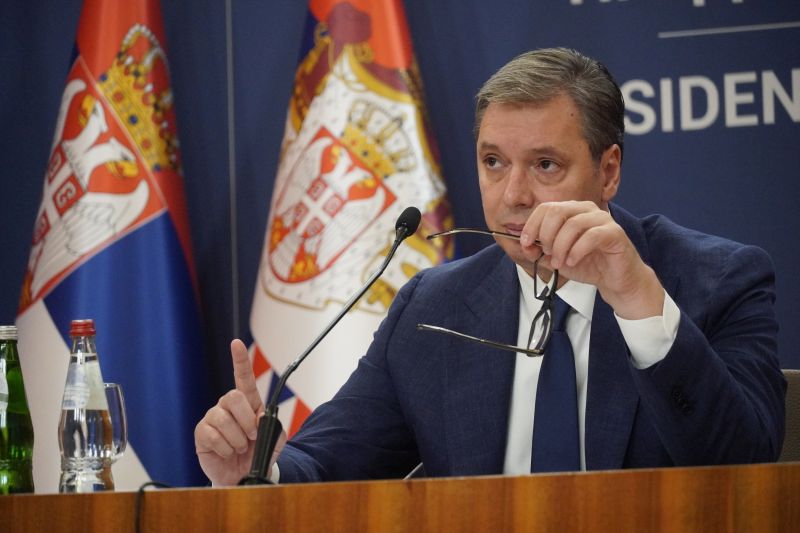