Due to Pristina’s unilateral moves, situation in Kosovo-Metohija has never been more difficult

President of the Republic of Serbia Aleksandar Vucic pointed out today at a press conference that the situation for our people in Kosovo and Metohija is very complicated and complex and appealed to both Serbs and Albanians in the province to preserve peace.

Following the unilateral decision of the temporary institutions in Pristina to introduce "new reciprocity measures" as of 1 August, according to which identity cards and car plates issued by Serbia are practically prohibited, Vucic said that we have never been in a more difficult situation.

The President said that, when it comes to ID cards, Pristina calls for the agreement on freedom of movement, item 3 from 2011, which states that each side can implement a system whereby ID cards will be accompanied by written, entry-exit documents for residents of the other country who wish to transit to a third country, while the footnote states that they will use status-neutral language.

He pointed out that what is defined for the residents of the other country who are transiting to a third country cannot apply to the Serbs from Kosovo and Metohija, clearly and unambiguously.

You cannot stop the Serbs from Zubina Potok, Zvecan, Kosovska Mitrovica and say that they cannot cross with a Serbian ID card, because they do not represent the other side, nor are they transiting to a third country, the President of Serbia noted.

When it comes to plates, he said that in the agreement from 2011, item 6 states that as a temporary measure, the authorities in Kosovo will extend the validity of KS plates, for an initial period of 5 years, after which the two parties will reconsider it, with the EU, if necessary, while item 7 states that all car owners in Kosovo and Metohija will have RKS or KS markings, and all parties will make an effort to ensure this.

Also, as he added, it is planned that the temporary measure of the authorities in Belgrade will be to allow cars with KS plates to pass through our territory.

In 2016, in the agreement signed by Marko Djuric, the validity of KS plates was defined and extended until 2021, he said.

However, in 2020, Pristina arbitrarily cancelled KS plates, the President emphasised, adding that today he wants to say that there are no more KS plates, that they are a sovereign state, because Quinta tells them so.

According to him, contrary to all norms, to everything that was signed, Pristina wants to implement something by force in the north, that's why they are campaigning.

We have held talks with the representatives of the Serbian people from Kosovo-Metohija, we will try to preserve the peace at all costs, to ask the Albanians to come to their senses and that the Serbs do not fall for provocations, Vucic said.

He asked the representatives of powerful countries to pay little attention to international law and the reality on the ground and that their wards do not cause conflict.

I had many conversations with representatives of the international community, Lajcak the most, but if anyone thinks it is possible to repeat 17 March 2004 or something that happened to our people in other parts of Yugoslavia, it will not happen, the President said.

According to him, the number of incidents since Kurti came to power has increased by 50 percent, with the list of attacks on Serbs on 12 pages. 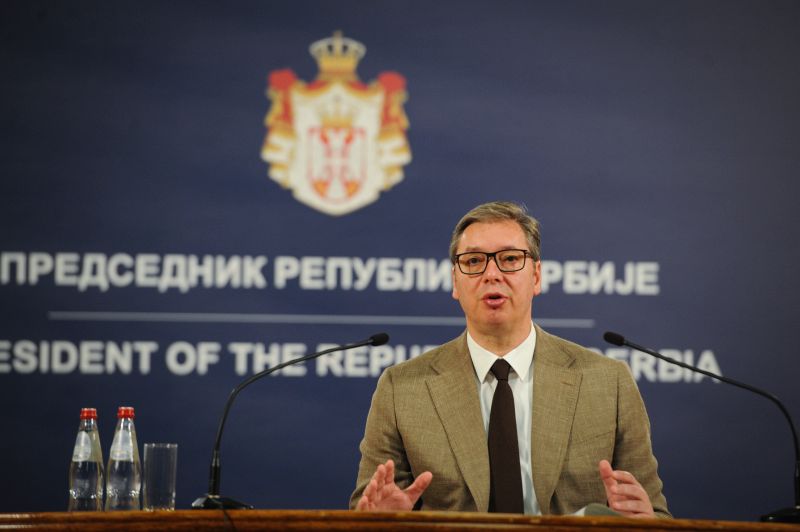