Prime Minister Ana Brnabic talked today with State Secretary of the Ministry of Foreign Affairs of the Federal Republic of Germany Miguel Berger about improving bilateral relations between the two countries, the reform process in Serbia, its European integration and cooperation in the Western Balkans region.

The Prime Minister pointed out that European integration is a strategic goal and a key priority of Serbia and added that she expects two more clusters to be opened during the Slovenian presidency of the Council of the European Union, which, she explained, would be a positive signal for our country.

Brnabic emphasised that Germany's support in the reform process and European integration is of exceptional importance for Serbia.

When it comes to the rule of law, the Prime Minister explained that this area is one of the key priorities of the government of Serbia and that the government has previously demonstrated its commitment to further reforms, so that the judiciary and its institutions are responsible, efficient and independent.

Speaking about the situation in the region, the Prime Minister emphasised that Serbia is committed to the dialogue between Belgrade and Pristina, which is important for the stability of the entire region, but added that there are great concerns about the current situation and Pristina's latest pressures on Serbian returnees.

Berger emphasised the importance of the dialogue between Belgrade and Pristina and stated that Germany will continue to provide full support to this process, in order to find a constructive solution.

The State Secretary of the German Ministry of Foreign Affairs stated that Germany is already noting the positive steps that Serbia is taking in fundamental areas, but also that the continuation of reforms, which require time and commitment, will bring key benefits to the citizens of Serbia.

He emphasised that Germany will continue to provide full support to Serbia on its European path.

When it comes to cooperation in the region, the important role and contribution of Germany to the improvement of cooperation in the Western Balkans region was emphasized at the meeting, primarily through the "Berlin Process" initiative.

The Prime Minister highlighted Serbia's commitment to the creation of the Common Regional Market and the importance we attach to initiatives aimed at strengthening stability, prosperity and economic integration in the region. 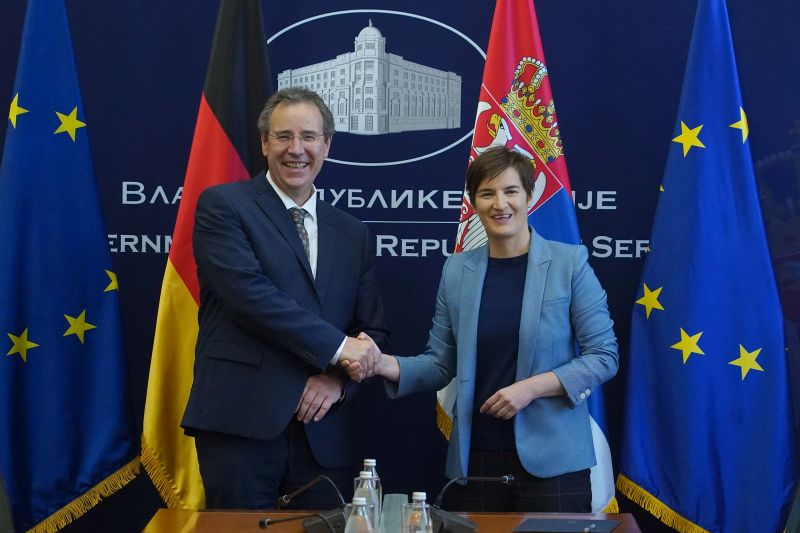