President of Serbia Aleksandar Vucic stated that our delegation in Brussels today could not agree on anything with the representatives of the temporary Pristina institutions, because they came with a pre-prepared decision to make the dialogue meaningless, so they also rejected the EU’s proposals, which were fully accepted by the Serbian side.

After talks with the Prime Minister of the Provisional Institutions of Pristina, Albin Kurti, Vucic explained that during today's meeting, Serbia received three EU’s proposals that were harmonised with the main negotiators and in all three points, without any objections, agreed with what the EU proposed, even she also accepted some of the wishes of the Albanians.

He said that the EU's proposals were to intensify efforts to identify the remains of the missing, to refrain from actions that could destabilise the situation on the ground, and to meet regularly with the chief negotiators once a month.

It is especially interesting that they did not want to accept the second point, they conditioned it all the time with new political criteria. The essence is that Serbia is allegedly guilty of three genocides, the first that happened in 1878 when it gained independence at the Berlin Congress, the President said, adding that Kurti also explained how Albanian surnames have their roots in toponyms in Serbia.

According to him, Kurti then talked about the genocide that Serbia committed during the Balkan wars or the First World War and the third in 1999.

We wanted to talk about the missing, about doing DNA analyses to satisfy families. They did not want to accept, said the President of Serbia.

He said that the conversation was very unpleasant in every sense, but he clearly said that he did not want to accept the assessment of those who would say that the guilt is equal, because Belgrade is not to blame.

There is no guilt of ours, we have fully accepted everything that the EU has written, without amendments, but some have come primarily to destroy the dialogue, and I am terribly worried about the second sentence, which they avoided accepting and that is that they will refrain from actions they can destabilise the situation on the ground, Vucic explained.

He said that Belgrade is ready for a dialogue, which will continue, but he also pointed out that today he is more worried about the security of Serbs in Kosovo and Metohija. 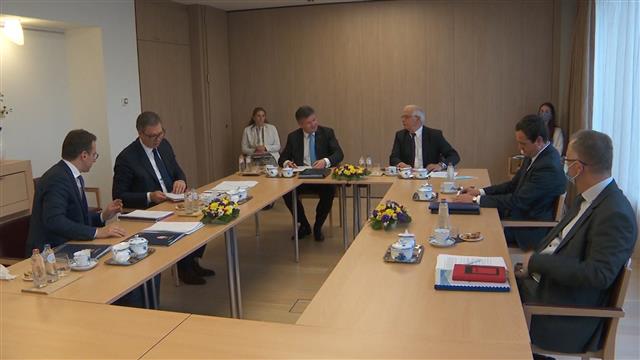