Minister of Foreign Affairs Nikola Selakovic pointed out today, at the UN Security Council session dedicated to Kosovo and Metohija, that the political situation in the southern Serbian province is unstable and extremism among Albanians is stronger.

Selakovic also drew attention to the latest reasons for Serb concern in Kosovo and Metohija, primarily Pristina's reaction to the Visoki Decani monastery, the construction of a KSF military base in the southern part of Kosovska Mitrovica, KSF military exercises, and undermining dialogue with Belgrade.

Despite that, Serbia is determined and will not give up finding a compromise solution, which will be sustainable for future generations, said Selakovic, adding that lasting peace and stability can be achieved only if none of the participants in the dialogue acts with maximalist demands.

He pointed out that the attacks aimed at Serbs and their property are increasing, stating that last year alone there were more than 80 attacks and incidents targeting Serbs, their property and religious buildings.

In Pristina, as he emphasised, there is absolutely not a trace of political will for more than 200,000 displaced Serbs, who have been living outside Kosovo and Metohija for 22 years, to return to their homes, while 212,995 people are still temporarily housed in central Serbia or Serb-majority municipalities.

Selakovic said that he expects the EULEX mission to continue supporting the Specialised Chambers and the Specialised Prosecutor's Office, as well as its additional engagement in the area of ​​the rule of law, whereby special attention should be paid to witness protection and determining the fate of missing persons.

He also expressed the expectation that the EU will make a decision on extending the mandate of EULEX in the following period as well.

He especially emphasised the importance of KFOR and pointed out that any unilateral attempt to assign someone else, or for someone to take over a part of KFOR's mandate and obligations, is a violation of UNSCR 1244 and is a potential source of instability and tension.

The head of Serbian diplomacy especially pointed out numerous physical attacks on the facilities of the Serbian Orthodox Church in Kosovo, emphasising that in just two weeks, as many as seven Orthodox facilities in the province were targeted by vandals, but he also drew attention to the Decani monastery case.

Selakovic pointed out that the condition of the Serbian cultural and spiritual heritage in Kosovo and Metohija is humiliating, including four monuments that are included in the UNESCO World Heritage List - Visoki Decani, Bogorodica Ljeviska, Gracanica and the Pec Patriarchate.

As he stated, the monastery of Visoki Decani is the most frequently attacked facility of cultural heritage in Kosovo and Metohija. 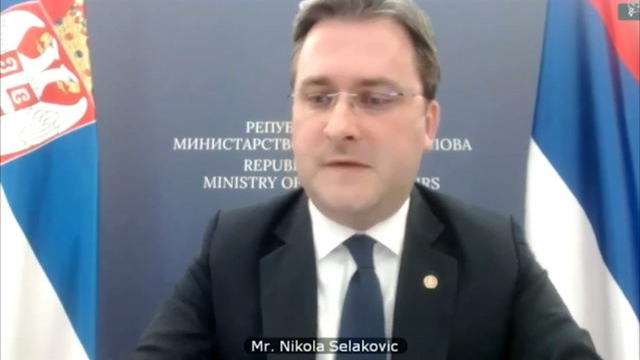