Formation of Community of Serb Municipalities prerequisite for continuation of dialogue

After today's round of technical dialogue with Pristina in Brussels, Director of the Office for Kosovo and Metohija Petar Petkovic said that the first issue Belgrade insisted on was the formation of the Community of Serb Municipalities (ZSO), adding that property and financial claims were also discussed.

In a statement to the press, Petkovic recalled that 2,800 days have passed without the ZSO being formed, saying that this is a key issue for us and if we are talking about a successful continuation of the dialogue, it is necessary for it to be formed.

He pointed out that the Belgrade delegation came to the meeting with ready documentation and proposals in order to establish a system of principles, mechanisms and bodies according to which property issues could be discussed.

According to him, Belgrade and Pristina have absolutely opposite views on this issue, where Pristina acts with its own interests and point of view, and Belgrade rationally and realistically.

We provide our evidence of what has been funded, who owns it, who has invested, as well as everything related to international standards when it comes to private property in particular, where it is known how to determine what is private, what is public property and how it is being resolved, Petkovic explained.

Raising the issue of property, according to him, contributes to the overall solution of all other problems in the dialogue.

Considering that today is International Human Rights Day, and mentioning the incidents, we certainly raised the issue of the position of Serbs in Kosovo and Metohija, violation of their rights, but also the latest incidents, especially attacks on Serb returnees in Metohija, but also attacks on central Kosovo, Petkovic said. 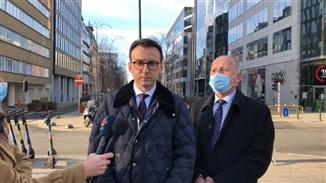