President of the Republic of Serbia Aleksandar Vucic stated tonight that the Serbian delegation came to Washington for talks in good faith to reach an agreement and that he still hopes that that is possible.

Addressing the press, Vucic said that there are very good things in the document offered as far as the economy is concerned.

He said that the meeting dealt with various projects, infrastructural connections between Belgrade and Pristina, which is good for Serbs and Albanians, as well as with further lending through credit schemes that have proven to be good for our micro, small and medium enterprises.

The President said that the possibility of the American International Development Finance Corporation (DFC) opening an office in Belgrade is being negotiated in Washington, which would be a great signal for the arrival of investors in our country.

If that happens, DFC would not have its office anywhere else in the Balkans except in Belgrade, Vucic explained and added that it has not been completely agreed yet, but it is extraordinary news for all three important rating agencies - Standard and Poor's, Moody's and Fitch.

We are also fighting for Pristina to accept the Mini Schengen, because that would mean the free flow of goods, capital, services and people, the President pointed out.

He said that the meeting was attended by representatives of the economic and financial sector of the US Government and Advisor to the US President Ivanka Trump, who stayed at the meeting for a short time, while a special meeting was held with the US National Security Advisor Robert O'Brien.

We now have three documents that we are negotiating, but we cannot show them because we don't have them with us, the President said and pointed out that the citizens of Serbia should not worry that anything that implies the recognition of Kosovo will be signed.

We will wait for the final document tomorrow and we will be able to show it, if there is one, Vucic underlined and reiterated that there should be no such fear that he will sign any document which means the recognition of Kosovo's independence

I rejected the point about recognition that was in the first version of the document "Economic Normalisation ", and the representatives of the Trump administration accepted that, so that point is not in the new versions of that document and it will no longer be a topic, Vucic specified.

The President emphasised that his job is to protect the Constitution of Serbia, that he will try to fight for a few more little things and that, if he succeeds, in the end he will be satisfied with the talks. 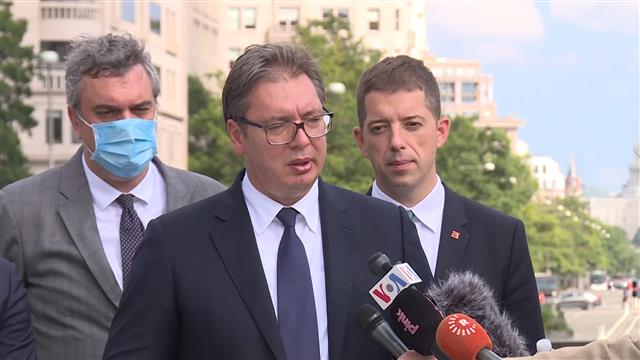