Continuation of technical negotiations with Pristina on 22 July

President of the Republic of Serbia Aleksandar Vucic stated tonight in Brussels, after a meeting with Prime Minister of the Provisional Institutions of Pristina Avdullah Hoti and EU representatives, that the Serbian side prepared well for the meeting and represented Serbia's interests in the best way.

Addressing the press, Vucic said that the meeting was not easy and that it was about missing persons, internally displaced persons and the economy, announcing that talks on a technical level will continue on 22 July.

Vucic added that he expects some other topics to be opened in the dialogue with Pristina from September, including the most difficult one - the issue of property, and said that he asked it to be in the form of establishment of a Community of Serb Municipalities while Pristina had some other idea.

He stated that 1,643 or 1,644 people are registered as missing, of which 570 are Serbs, and underlined that Serbia wants to respond to all requests of the Albanians regarding possible locations where they believe that these people are buried, and that together with them and the EU we look if there is something in that place or not.

However, he added, we asked for the same right for us because we have not had access to locations in Kosovo so far, such as Kosare, Istok and other places.

The Albanians demanded that all military and police archives be opened, but our delegation, in accordance with that, requested the opening of the archives of the so-called KLA, so that we could see where Serbs and other non-Albanians were killed, he explained.

According to Vucic, it was agreed that they would work together with the Red Cross on the issue of the missing, accept the rules and express the political will to search for the missing persons.

When it comes to internally displaced persons, he said that there are approximately 220,000 of them, of which 177,000 are Serbs, emphasising that security and safety must be guaranteed to those who want to return.

Also, Vucic pointed out that it is necessary to reach a trade agreement that would be good for both sides, for Belgrade and Pristina alike.

Another topic of the meeting was the speeding up of works on the Nis-Pristina motorway, with the participation of the EU and the use of grants.

The Serbian President concluded that Serbia will be dedicated to the dialogue with Pristina and that it is important to bring the positions of the two sides closer on all issues. 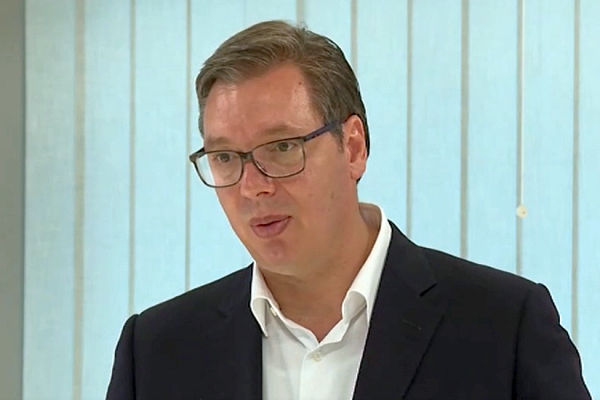