Modernization of state administration, better services for all citizens

Prime Minister Ana Brnabic, who is on a one-day visit to Subotica during the celebration of the government's one year of work, visited the pharmacy "Subotica" where she attended the presentation of the eRecept system and a single waiting list for health interventions. 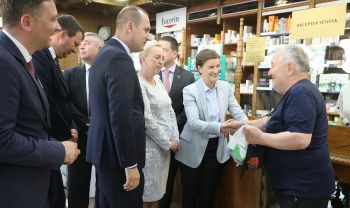 The system, which functions in the territory of whole Serbia since 30 June, enables the automatic issuance of recipes for chronic patients for a period of 6 months. This means that chronic patients will not, as before, go for prescriptions to doctors 12 times a year, but only twice. Since the introduction of this system, by the end of June, 32,785,678 recipes were prescribed. Approximately €2 million will be saved annually on the necessary recipe printing material.

The Prime Minister pointed out that the modernization of state administration and better services for all citizens are a priority of the government.

A centralised application for waiting lists for health interventions has consolidated the previous 26 special lists and resolved the multi-week problem of non-patient lists of patients and long waiting times. Citizens are finally able to get faster specialist diagnostics and medical intervention, as well as transparent access to waiting lists, which are updated daily.

The Prime Minister recalled that electronic services, in addition to state administration and health care, were introduced in the judiciary, education, agriculture and construction.

She stressed that Serbia has all the preconditions for successfully responding to the challenges of the fourth industrial revolution, which is the basis for the further development of the economy.