Desulfurization introduced in B1, B2 blocks in Kostolac

Prime Minister Ana Brnabic stated today that the project of construction of a plant for flue-gas desulfurization in the B1 and B2 blocks in the thermal electric power plant "Kostolac B" has been completed in cooperation with China. 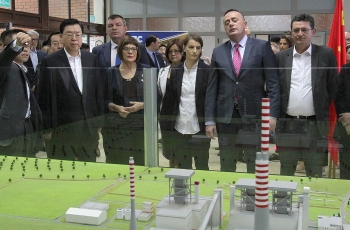 Author: Fonet
After visiting this energy facility, Brnabic and Chairman of the Standing Committee of the 12th National People's Congress of the People's Republic of China Zhang Dejiang pointed out that the trial work is underway and that a usage permit is expected to be obtained soon.

She recalled that the same Chinese company "CMEC" will build a new block of 350 megawatts, which will be significant for increasing the capacity of the Serbian energy sector.

The Serbian government is cooperating with China on serious projects, and one of them is thermal electric power plant Kostolac, she said, and announced that she will visit Zelezara Smederevo steelworks together with the Chinese delegation, which is one of the biggest successful projects of cooperation between the two countries.

In addition to these two projects, China and Serbia cooperate in a wide range of other projects, from tourism to infrastructure.

Also, one of the most important projects is the modernization of the Belgrade-Budapest railway, as well as introduction of a direct flight between Belgrade and Beijing as of autumn, and a great progress has been achieved in cooperation in the field of agriculture and culture, Brnabic pointed out.

According to her, it is very important that Serbia is one of the central countries for China in the global project of that country One Belt, One Road, and the fact that Serbia has just positioned itself as a central country for cooperation between the EU and China, which is a privilege and great incentive for our economy.