Serbia's progress in all areas main task of new government

Belgrade, 9 Aug 2016 – Prime Minister Aleksandar Vucic, who is also Prime Minister Designate, said in the Assembly of Serbia, at the beginning of his keynote address to present the programme of the new government, that he would not let Serbia regress and grind to a halt, but rather progress and increase the standard of living of its citizens. 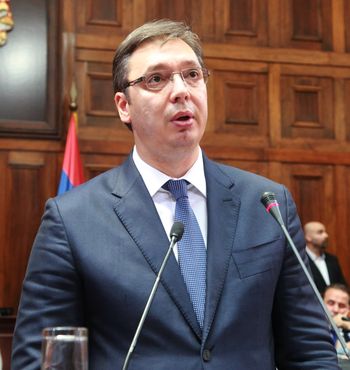 He said that Serbia has achieved tremendous progress thanks to the knowledge and diligence.

I am not in the parliament today just to form the new government, but also for all of us to raise the bar together and test our capabilities and limits, Vucic stressed.

Serbia started to work because it found a clear goal, to be on the top that can be reached by knowledge, work and effort, said the Prime Minister.

This is the top based on knowledge, progress and diligence, that can be reached only if you win over yourself, Vucic said and added that after a long time we have results that we can be proud of.

The Prime Minister said that public sector workers, police officers and members of the army and defence, as well as employees in the social, health and education sectors can expect a further increase in wages.

The main objective is to increase growth by increasing consumption, and not only through an increase in exports and investments, he said and recalled that since 2014, 124,000 new jobs have been opened, that a new plant was opened every month on average, that the currency got stable and that we achieved low inflation.

Economic, regional and political stability is a condition for new foreign and domestic investments, and stability is also bringing good international reputation and respect for the country because it is able to manage on its own and because it is a sovereign, trusted country that is a dependable partner to its friends, Vucic said.

The previous government achieved stability and the new one will work even harder to achieve prosperity and progress, he said.

At the same time, Vucic reiterated that the new government will strive for peace and stability in the region, and added that we will create conditions for better relations, but also that we know to protect our national interests.

According to Vucic, in the difficult geopolitical conditions, especially after Brexit and unsuccessful military coup in Turkey, it is harder and more complicated to pursue a policy of Serbia.

We have become the centre of development and stability. We have attracted the largest number of investors, both foreign and domestic. Last year we had €1.85 one billion of investments with no privatisations, he said.

He stressed that Serbia's path is one of peace, dialogue and development, and reiterated that for factories, roads and schools in Serbia we need a stable region without conflicts.

We are ready to discover all the good in the region. We are ready to invest in their painful memory, as well as in ours. We see it as the first step toward the day when we will all remember and respect all, the day when everyone will know that together we learned a bloody lesson, not to be repeated, Vucic said.