Belgrade Waterfront to turn Serbia’s capital into centre of region

Prime Minister Aleksandar Vucic announced today at the presentation of the Master Plan of the project “Belgrade Waterfront” that the Belgrade Tower, as a symbol of this project, will be completed by the end of 2016. 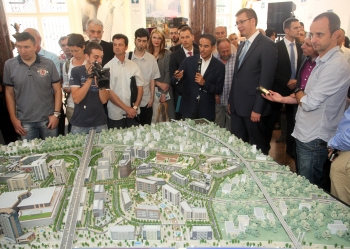 At a meeting held at the renovated building of Beogradska Zadruga, Vucic expressed gratitude to the investor and CEO of the company Eagle Hills Mohamed Alabbar and said that after the completion of this project Belgrade will become one of the most beautiful places in the world.

Speaking about facilities that will make the “Belgrade Waterfront”, Vucic confirmed that the construction of the first A phase of a shopping mall will start in spring next year.

He reiterated that the Belgrade Tower will be completed by the end of 2016, and underlined that this will be a record deadline for speedy construction, even for the United Arab Emirates.

Before the end of 2016, citizens of Belgrade will be able to admire this large tower and its surroundings, bridges and areas with restaurants and coffee shops, the Prime Minister stated.

Alabbar thanked the Serbian government on the trust it invested in the company Eagle Hills, which will use modern technologies to build this project, at the same time taking care to preserve the spirit of Belgrade.

He said that the value of the entire investment will be $3.1 billion, but that it might reach $4 billion by the end of works. 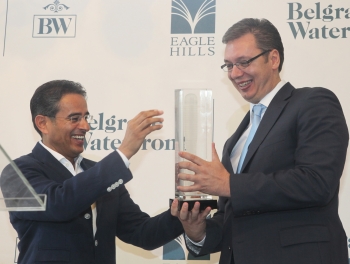 Mohamed Alabbar, left, and Aleksandar Vucic
The CEO of Eagle Hills expressed hope that owing to an increased tourist and business activity that will result from this project, Serbia’s capital will become the centre of the region.

He underlined that here it is not only about a mere construction project, but about the process of changing the lives of people and of an entire city.

We are honoured by the fact that the citizens of Serbia trust us that we will make something that will bring a fundamental change to their lives. This project will contribute to changes in society and development of this city, will inspire people with optimism and the feeling of pride, Alabbar declared.

According to him, it is important to preserve local surroundings, tradition, architecture and the spirit of Belgrade.

The “Belgrade Waterfront” will include office space, apartments, hotels, a central park, riverside, transport systems, car parks, educational institutions and everything else that the life in a modern metropolis requires, Alabbar specified.

He said that the first stage will be the construction of a large shopping mall, the Belgrade Tower, two hotels and several residential and office space buildings. Later in the project, local contractors and suppliers will also be included, with the aim of boosting the local economy.

This Arab investor also financed the reconstruction of the building of Beogradska Zadruga, a monument of culture built more than a hundred years ago, at which the mock-up of the “Belgrade Waterfront” was presented today.

Vucic said that 300 Serbian workers were employed on the reconstruction of the building and that the works cost considerably more than $2.5 million, as originally planned.

The company Eagle Hills will build more than 2 million square metres of residential and office space on the right bank of the river Sava.

The contractor of the project of improvement of the Sava riverbank, from the Branko bridge to the Belgrade fairgrounds, on behalf of the Serbian government will be Belgrade Waterfront Ltd. which was established yesterday.

VIDEO: Presentation of the Master Plan of the project “Belgrade Waterfront” (source: Tanjug)