Most intense foreign policy week in a long time

Minister of Foreign Affairs Nikola Selakovic said today, summarising the activities of the Serbian delegation at the 77th session of the UN General Assembly, that the past week was the most intense in the past year, and perhaps for an even longer period, when it comes to Serbia's foreign policy activities.

At a press conference at the Ministry of Foreign Affairs, Selakovic said that on the sidelines of the UN General Assembly, President Aleksandar Vucic and he had an extremely large number of meetings.

I myself had the opportunity to make direct contact with 95 ministers of foreign affairs of the UN member states and to discuss various topics, as well as to sign a total of 13 different agreements, protocols, memoranda, plans. I would especially emphasise the fact that we concluded agreements with Brazil, Colombia and Senegal, Selakovic said.

The main topics of those meetings concerned Kosovo and Metohija, the defence of our state and national interests and the improvement of bilateral relations, he said.

According to him, the meetings of the Serbian President with National Security Advisor of the US President Jake Sullivan as well as with several members of Congress and various representatives of American society were of particular importance.

These meetings also talk about the establishment of new dynamics of relations with the United States and our commitment to improving those relations. Those talks concerned the topic of energy, energy diversification, with a special emphasis on the plans for the construction of solar parks and wind generators, the construction of the Djerdap 3 hydroelectric power plant, which, due to relations with our neighbour Romania and their international relations, contacts and position, can only be built by the United States. And there is also the construction of the Serbia-Bulgaria and Serbia-North Macedonia interconnector, the head of Serbian diplomacy said.

On the other hand, it would be completely contrary to our national interests, our policy of preserving territorial integrity and sovereignty and commitment to the principle of inviolability of borders, Selakovic explained.

When asked what the consultation plan with the Ministry of Foreign Affairs of Russia that was signed in New York entails, the head of Serbian diplomacy replied that it is something that has been signed since 1996, that is, a technical matter that this year, in addition to containing bilateral and multilateral consultations concerning the UN, which is important for us because of Kosovo and Metohija, does not include security policy consultations as a topic.

He pointed out that the questions related to that document are a search for a sufficient reason to attack Serbia and to try to discipline Serbia.

We talk with all countries, especially with the countries that did not recognise the unilaterally declared independence of Kosovo and Metohija, we also consult with those with whom our views are completely opposite, and these consultations are nothing more than an attempt to better argue our position, Selakovic said. 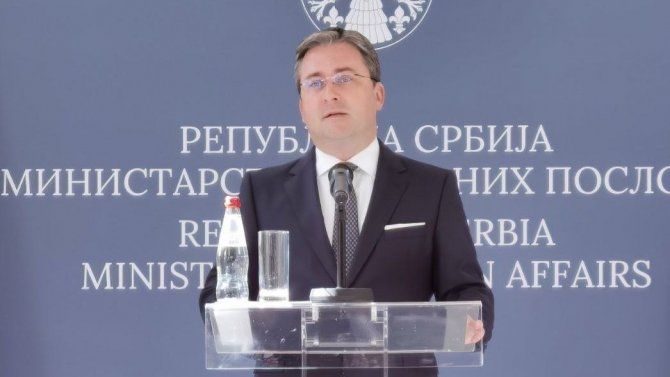