Permanent Representative of the Republic of Serbia to the UN in New York Ambassador Nemanja Stevanovic said today at the 11th emergency special session of the UN General Assembly that Serbia is committed to respecting the principles of territorial integrity and political independence, basic principles of international law contained in the UN Charter and the Helsinki Final Act (1975), which guarantees the right of states to inviolability of borders.

The official website of the government of the Republic of Serbia broadcasts in its entirety the statement of Ambassador Stevanovic at the 11th emergency special session of the United Nations General Assembly:

“The Republic of Serbia most sincerely regrets everything that takes place in the east of Europe. Russia and Ukraine have always been friendly countries to the Republic of Serbia, and Serbian people think of Russians and Ukrainians as of fraternal nations. We see loss of life of each man in Ukraine as a true tragedy.

The Republic of Serbia is committed to observing principles of territorial integrity and political independence of the states, as one of the basic principles of international law contained in the United Nations Charter and the Helsinki Final Act (1975), which guarantee the right of states to inviolability of borders.

Just like it is committed to preservation of sovereignty and integrity of its own territory, the Republic of Serbia is likewise advocating respect for territorial integrity of other sovereign countries, and regardless of not agreeing with all formulations contained in the Resolution, it voted in favor of the respective.

I am obliged to point to PP13 and remind that the first attack against a sovereign state on the soil of Europe after the World War II took place not so long ago, in 1999, when 19 countries attacked, at that time the Federal Republic of Yugoslavia, primarily the Republic of Serbia, when there was no appropriate reaction of such a distinguished institution to flagrant violation of the UN Charter. Despite the fact that it still suffers from consequences of severe violation of fundamental principles of international law by others, Serbia is not giving up those principles even today.

The Republic of Serbia will continue to advocate termination of conflicts, expecting that the parties will put additional efforts into reaching diplomatic solution and creating conditions for peace through the dialogue. Serbia will provide any kind of humanitarian aid to the endangered Ukrainian citizens, while remaining committed to peace and consistent respect for international law.” 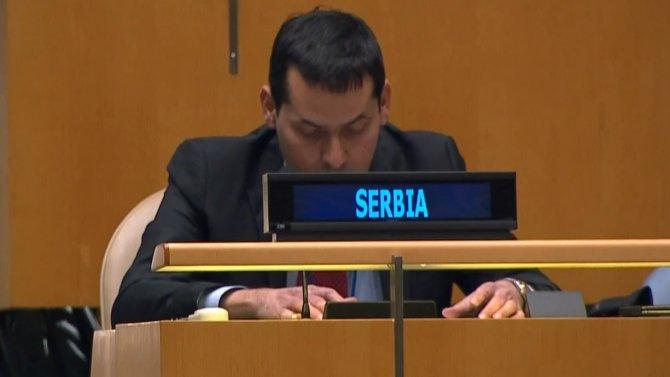