France's support stimulus to European path of Serbia and the region

Prime Minister Ana Brnabic said today during the talks with newly appointed French Ambassador to Serbia Pierre Cochard that cooperation and partnership with France is at a very high level, primarily thanks to open political dialogue between the officials of the two countries.

Brnabic pointed to the importance of opening the office of the French Agency for Development (ADF) in Serbia, which is a clear indicator of that country's interest in a more widespread presence in our country over a longer term.

At the same time, as she explained, it is a significant incentive for the continuation of cooperation on projects related to investments in road and railway infrastructure, as well as the construction of water supply and sewerage network and wastewater treatment plants.

Brnabic underlined that, thanks to the signing of the agreement between the two governments, the beginning of work on the construction of the Belgrade motorway has been enabled, as well as the improvement of energy efficiency in Serbia, which are key projects for our country and great potential for improving mutual relations.

She said that Serbia extremely appreciates France's support for European integration, as well as regional initiatives, adding that it is an important stimulus to the European path not only of Serbia, but also of the region as a whole.

The Prime Minister informed her interlocutor about the achievements in the area of reforms related to the rule of law and media freedoms, and invited him to join the Working Group for the Protection and Safety of Journalists.

Speaking about development cooperation, Cochard assessed that Serbia is recognised as an important strategic partner and expressed confidence that French companies will continue to develop their business in our country.

He underlined that France will continue to support Serbia's European integration, primarily through the provision of expert support in that process, and that he is convinced that the implementation of reforms will give positive results. 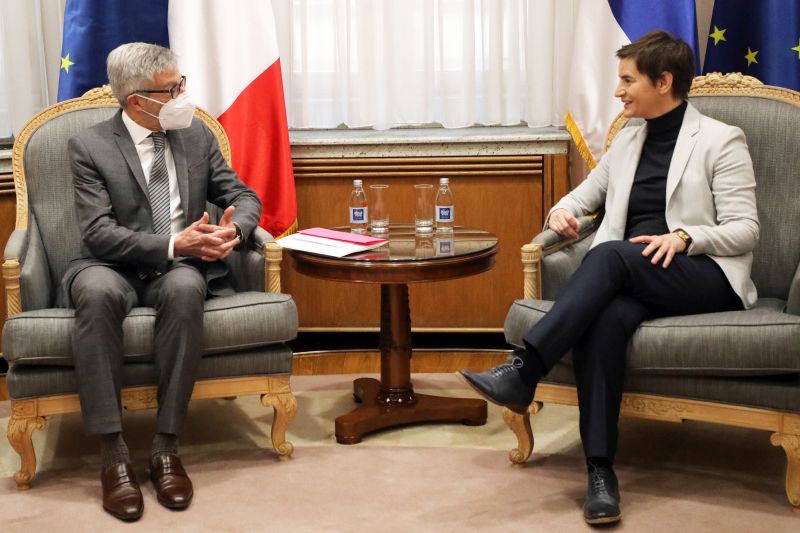