Today, as part of her visit to the Ovcar-Kablar gorge, Prime Minister Ana Brnabic visited the works on Lake Medjuvrsje next to the Cacak-Pozega highway.

Brnabi pointed out that the Ovcar-Kablar gorge is one of the biggest and most valuable pearls of our tourism, but also of culture and religious buildings, in which no investment has been made for more than 60 years.

It is a project of national importance and is being read by the entire government. We want to return the Ovcar-Kablar gorge to the people, monasteries and nature of Serbia, the Prime Minister said.

She reminded that the government came out in December with a comprehensive plan on how to fix the Ovcar-Kablar gorge, so that we could have the gorge in full glory in parallel with the opening of the section of the Milos the Great highway to Pozega.

We have started a lot of things, in September we will be able to open a reconstructed railway station, visit a new port, a new square in Ovcar Banja and an amphitheatre, Brnabic stated and added that she was not sure that the Nature Centre would be completed by then.

The Prime Minister pointed out that one of the biggest capital projects is the siltation of Lake Medjuvrsje, emphasizing that they are currently working on cleaning from grass and reeds.

Brnabic stated that only in the first seven days, 70 tons of grass and reeds were extracted from the lake, and thus it was not even halfway when it comes to cleaning that lake.

The Prime Minister also assessed that Serbia is unfairly absent from the European lists for spa tourism, and announced that this will change by 2023.

She reminded that Serbia used to be famous for spa tourism and that our country was visited by guests from Europe, but that since the 1990s, for several reasons, there has been no investment in spas, which have fallen into oblivion.

Brnabic emphasised that all that is changing now and that spa tourism is slowly developing, which is seen by both citizens and domestic and foreign investors, reminding that more and more vouchers are awarded every year, which are mostly used in our spas.

We are returning to our spa tourism, and as we build one spa at a time, it will be more and more revenue for the state, but also for local governments and citizens, the Prime Minister said.

Answering the question about the "Open Balkans" initiative, in which Serbia, North Macedonia and Albania participate, she pointed out that it will contribute to a different connection between the peoples and the economies, because it enables completely free flow of goods, whose primary market is in the region.

The Prime Minister pointed out that this initiative has many opponents, but that it is necessary for a different future of the Balkans, and added that it is important for domestic investors and for young people who will have the opportunity to find employment more easily.

I hope that others from the Balkans will continue to join, as it will be beneficial both economically and politically, Brnabic said.

The visit was also attended by Minister of Environmental Protection Irena Vujovic, Minister of Trade, Tourism and Telecommunications Tatjana Matic and Mayor of Cacak Milun Todorovic. 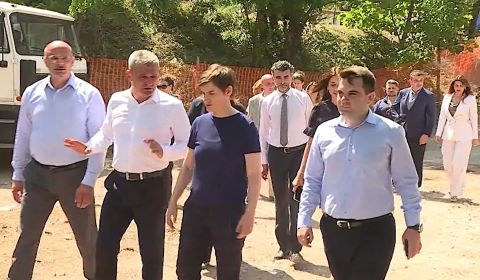