Minister of Foreign Affairs Nikola Selakovic stated today in Baku that Serbia attaches special importance to the strategic partnership with Azerbaijan, expressing confidence that in the coming period there will be intensified dialogue at the highest level.

Selakovic, who is on a visit to Azerbaijan, said at a joint press conference with the country's foreign minister, Jeyhun Bayramov, that the excellent friendly relations between the presidents of the two countries also make a significant contribution to strategic bilateral cooperation.

The Minister stated that the meeting with Bayram was very successful and that the mutual desire to intensify cooperation at the bilateral and multilateral level was confirmed, while inviting the Minister of Foreign Affairs of Azerbaijan to pay a return, official visit to Serbia.

Also, the head of Serbian diplomacy said that he talked with his Azerbaijani colleague about holding bilateral political consultations between the ministries of the two countries, especially in the field of consular affairs.

He especially emphasised that both countries are committed to respecting the principles of international law, as well as to providing mutual support for the preservation of territorial integrity and sovereignty.

Selakovic expressed gratitude for the confirmed principled and clear position of Azerbaijan when it comes to non-recognition of the unilaterally declared independence of the so-called Kosovo, as well as on understanding and support in international organizations.

According to him, it was stated at the meeting that economic cooperation is good and has a tendency to grow, but also that economic relations and trade exchange can be much better.

The Minister pointed out that certain Azerbaijani companies, such as the company "Azvirt", are engaged in Serbia, which are working on numerous infrastructure projects in our country.

Selakovic also pointed out that he talked with his Azerbaijani colleague about visa liberalization and the establishment of direct flights between Belgrade and Baku.

He stated that the topic of the meeting was the joint celebration of the 60th anniversary of the First Conference of the Movement of Non-Aligned Countries in Belgrade, and he expressed satisfaction that, before the opening of this gathering, President Ilham Aliyev's visit to Serbia will take place.

The Minister emphasized that this is a historic visit of great importance for our country, as well as for future cooperation with Azerbaijan.

Selakovic said that the excellent talks with Aliyev and Bayram were an incentive to continue the visit and meetings with the ministers of economy and defense industry, but also for the session of the Intergovernmental Committee for Economy and Business Forum, which will be held tomorrow. 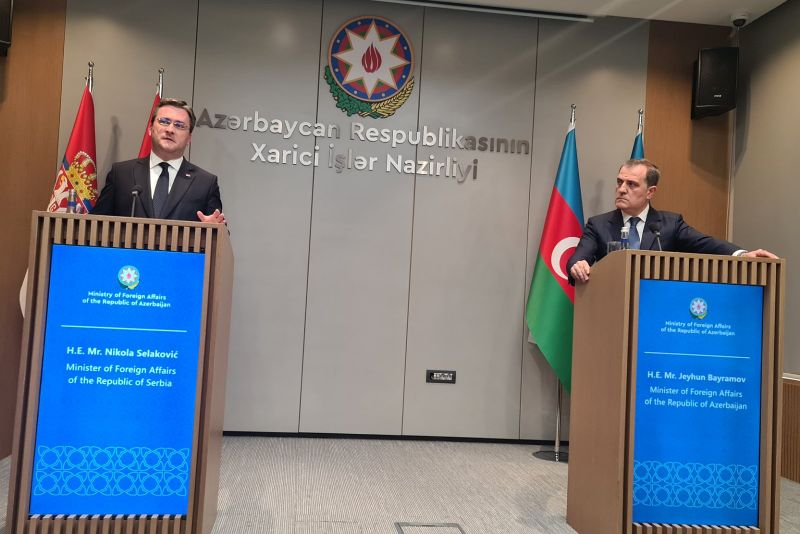