Prime Minister Ana Brnabic said today in Subotica, where she presented the results of work of the Serbian government in the first year, that she is convinced that these results have moved forward us as a society and our country. 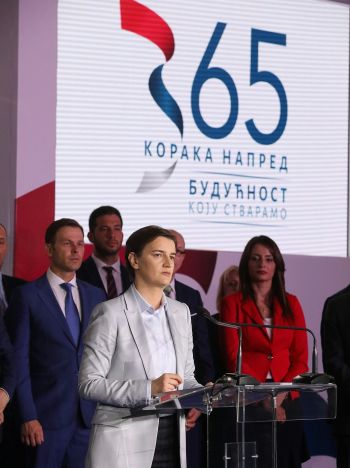 At a press conference at Lake Palic, Brnabic said that the government that she is leading wants to be open, accessible and affordable to citizens, result-oriented and dedicated to fulfilling its promises every day.

The entire government and all the ministers worked diligently and with dedication, and I am very satisfied with the results achieved, the Prime Minister stated.

I want and it is important to emphasise that we are a same team with Serbian President Aleksandar Vucic and his team, and we are continuing together the reforms initiated during the mandate of this government, she underlined.

The Prime Minister pointed out that the government is working in the service of its citizens and recalled that during the 365 days of its work, this government increased pensions and salaries in the public sector and that economic reforms and public administration reform continued.

By the end of this year, the 2014 Pension Reduction Law will be abolished and all pensions will be increased by 7.2 percent, and there will be an additional increase for those with the least privileges, said Brnabic, and recalled that the pensions had been previously increased by five percent.

Also, she stated that wages in the public sector increased between five and 10 percent and that another increase is planned by the end of the year, thanks to the good results of fiscal discipline.

Financial discipline has been maintained and important infrastructure projects have been continued, the Prime Minister said and added that the Clinical Centre in Nis has been completed, and that the National Museum and the Museum of Contemporary Art, both in Belgrade, have been opened.

According to the Prime Minister, yesterday we had a surplus in the budget of RSD 29.7 billion, public debt has been reduced and amounted to 59.6 percent, and economic growth remains a priority.

Referring to the Financial Times, Brnabic said that Serbia attracted 12 times more foreign direct investment than expected and thus became the world champion in the competition of 194 countries.

The net inflow of foreign investment in first six months is €1.1 billion. 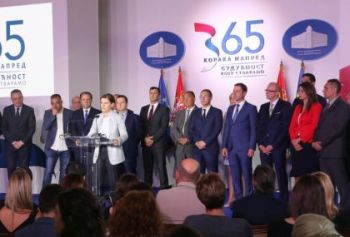 The Prime Minister pointed out that Serbia was the 43rd out of 190 countries on the World Bank's Doing Business List last year, which is the best position ever on that list, and the World Bank has declared our country a leader in the implementation of reforms in Southeast Europe.

According to her, we have completed a three-year arrangement with the IMF, praised as one of the reformist champions in the world, and we have agreed on a new one without financial support, which we do not need even out of precaution, in order to ensure the continuation of structural reforms.

The Prime Minister announced that 35 new contracts with domestic and foreign investors were signed, worth €250 million, which will create 9,227 new jobs.

Brnabic pointed out that in the first quarter of this year, there was a 4.6 percent growth, the highest growth in the past decade.

Brnabic recalled that IT and computer science were introduced as a compulsory subject in the fifth grade of elementary school, and underlined that Serbia has the best programme in Europe.

The Prime Minister stated that in the past year, more than RSD 81 billion were invested in road and rail infrastructure, 36 kilometres of the motorway on Corridor 10 were opened, an agreement worth €450 million for the section Preljina-Pozega was signed, and 77, 6 kilometres of rail tracks were reconstructed and opened for traffic.

Brnabic said that electronic health booklets were introduced, the E-Baby project was extended and e-Prescription and e-Court platforms were launched. She announced further work of the Government in priority areas.