Further improvement of cooperation between Serbia, UK in field of defence

Deputy Prime Minister and Minister of Defence Nebojsa Stefanovic met today in London with UK Secretary of State for Defence Ben Wallace, with whom he discussed cooperation between the two countries in the field of defence and possibilities for its further improvement.

The officials agreed that the talks at the strategic level, carried out in difficult circumstances due to the COVID-19 pandemic, are the crown of the current cooperation in the field of defence and are important for further intensification of overall bilateral relations.

Stefanovic said that Serbia is determined to strengthen its relations in the field of defence in the mutual interest by joint efforts.

The Deputy Prime Minister singled out the joint engagement in the multinational operation UNFICYP in Cyprus, which is the crown of military cooperation so far.

In addition to continuing the education of members of the Ministry of Defence and the Serbian Army in the United Kingdom, Stefanovic emphasised the interest of our side in the further development of military-military, military medical, as well as military-economic cooperation, which is very important for Serbia.

Wallace said that the Arrangement between the two defence ministries on improving cooperation in the field of defence, signed during his visit to Belgrade in June last year, is another indicator of mutual readiness and commitment to developing and concretizing bilateral military cooperation.

Assessing military-military cooperation as very good, Wallace expressed his determination to increase the joint participation of members of the British and Serbian armies in United Nations missions, as well as to develop cooperation between our defence industries. 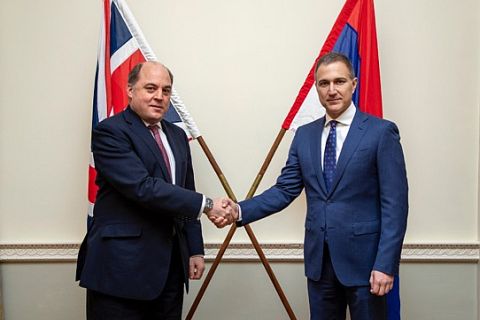