Minister of the Interior Aleksandar Vulin stated in Vienna today that Serbia and the EU are affected by the same security challenges – organised crime and irregular migration, to which only firm cooperation can provide a successful response.

Speaking at a joint press conference, after a meeting with Austrian Minister of the Interior Karl Nehammer, Vulin reiterated that Serbia is not and will not be a space for migrants.

No one can enter and leave our territory illegally and our country is not a springboard for entry into Austria or any other country. By defending our country, we defend your country and every other. By protecting our way of life, we protect yours too, the Minister underlined.

Noting that although it is not an EU member, Serbia faces the same challenges as the member states, Vulin stated and added that our country should have the same position and assistance in the fight against the consequences of irregular migration, for which it does not bear the slightest responsibility, as if it were a member of the EU.

I am grateful that our proposal to make joint Serbo-Austrian patrols at the border towards North Macedonia was accepted and we agreed to invite our Hungarian colleagues to join these patrols, Vulin said.

Nehammer underlined that Austria and Serbia have a common goal – to suppress human traffickers and irregular migrants by means of intensive cooperation.

a tactical exercise at the shooting range in Hochfilzen, at which members of this unit demonstrated their skills in the use of explosives and special vehicles, as well as dog training.

Vulin underlined that the exchange of experiences of the two countries’ special units and the perfection of new knowledge and methods are extremely important in the fight against terrorism and organised crime. 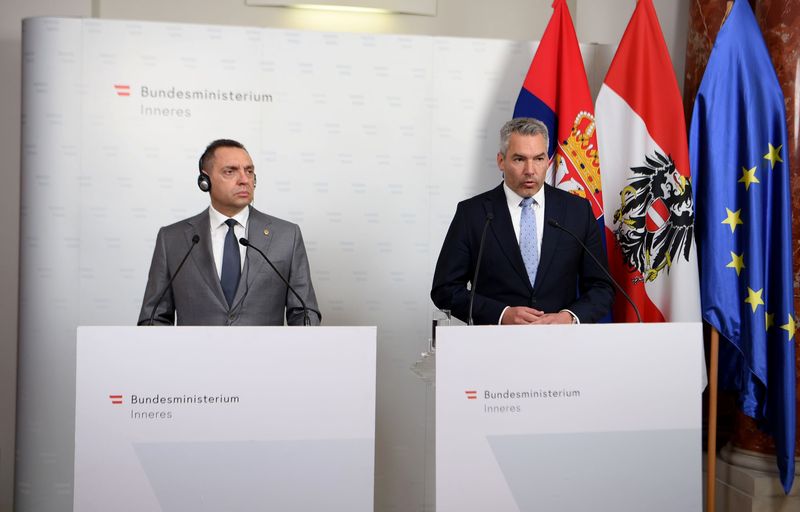