Deputy Prime Minister and Minister of Defence Nebojsa Stefanovic stated today that Serbia sees its future in the European Union and that full membership is a foreign policy priority of our country.

Speaking at the Conference of Defence Ministers of the Graz Format in Krems, Austria, Stefanovic underlined that the process of European integration is one of the main catalysts of the social and economic development, which at the same time contributes to the overall improvement of the national safety and defence.

He expressed gratitude to the Austrian Ministry of Defence and Minister Klaudia Tanner for the continued support which that country, as a member of the European Union, gives to the countries of the region.

Stefanovic said that Serbia advocates the start and completion of negotiations on accession to the European Union with all states in our region and believes that that is the crucial thing not only for security, but also for the economy.

According to him, majority of current security threats, of which most have a transnational character, imposes the need for cooperation among all states in the region, Europe and the world.

The Deputy Prime Minister underlined that it is not possible to give a comprehensive response to hybrid threats, terrorism, religious extremism, and especially challenges such as the COVID pandemic and migrations with an isolated action of one or a group of states.

Tanner stated that the European Union remains incomplete without the Western Balkans and that Austria will continue to advocate continuation of European integration.

The defence ministers of Austria, Albania, Bosnia and Herzegovina, Montenegro, North Macedonia and Serbia signed today the Joint Declaration, which gives an impetus to cooperation and dialogue in the field of security and defence for the coming period. 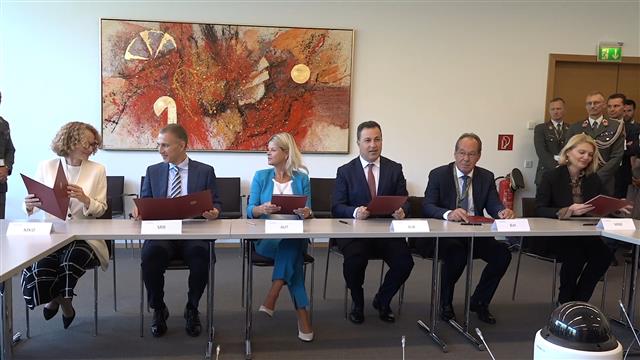