Minister of Foreign Affairs Nikola Selakovic met today with Special Representative for the Western Balkans and Deputy Assistant Secretary at the US Department of State Matthew Palmer.

Pointing to an important jubilee this year - the 140th anniversary of the establishment of diplomatic relations between Serbia and the United States, Selakovic expressed hope that, in accordance with the conditions of the pandemic, this important anniversary would be adequately marked, and that a high-level visit would be a demonstration of US commitment to improve relations with our country.

Speaking about economic cooperation, the Minister conveyed Serbia’s commitment to its intensification, especially having in mind the potentials for the improvement of economic activities.

Selakovic said that it is of key interest for Serbia to preserve peace and stability in the region and the region's orientation towards more intensive economic cooperation, and in that sense stressed that improving good neighbourly and mutually beneficial relations is a fundamental and unchanging starting point of Serbia's overall foreign policy.

Selakovic pointed out that the dialogue on the normalisation of relations between Belgrade and Pristina, with the mediation of the EU, is the only right way to reach an sustainable agreement between the two sides.

He underlined that the key compromise implies a responsible and serious approach, and said that Serbia will continue to participate in the talks in good faith and that it is ready to continue the dialogue.

We consider it unacceptable for Pristina to avoid fulfilling its obligations, primarily the formation of the Community of Serb Municipalities, insisting only on mutual recognition, Selakovic stressed, adding that Albin Kurti's current inflammatory rhetoric does not contribute to creating a favourable atmosphere for the continuation of dialogue.

Selakovic expressed concern over the increasingly frequent physical attacks on the facilities of the Serbian Orthodox Church and recalled that the Visoki Decani monastery has recently been included in the list of seven most endangered cultural monuments in Europe by the organisation "Europa Nostra".

The Minister of Foreign Affairs conveyed his gratitude to Palmer for visiting the Visoki Decani Monastery and meeting with Bishop of Raska and Prizren Teodosije and Abbot Sava Janjic two days ago, as well as for the statement given on that occasion regarding the monastery property.

Speaking about Serbia's European integration, Selakovic expressed gratitude for Washington's continuous support to our path to full EU membership, to which Serbia is committed as its priority strategic commitment, the Foreign Ministry said in a statement. 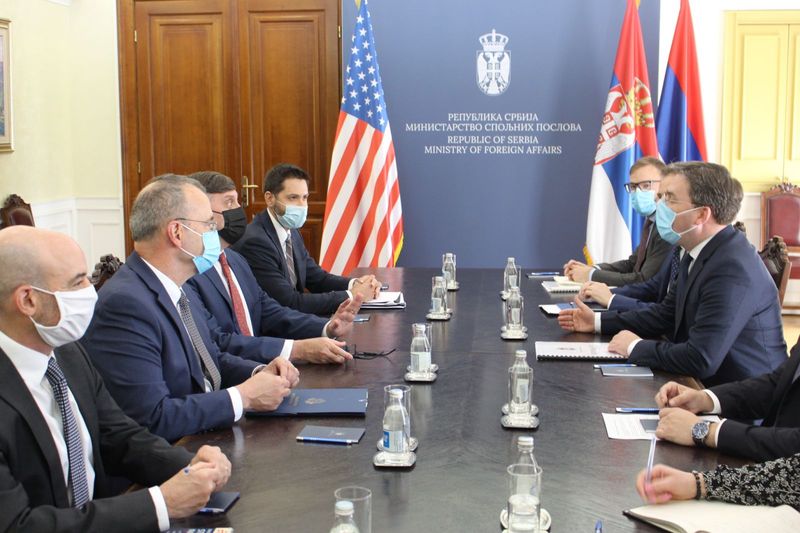