Completion of Preljina-Pozega section in early 2022

President of the Republic of Serbia Aleksandar Vucic and Minister of Construction, Transport and Infrastructure Tomislav Momirovic visited today the works on the section of the highway "Milos the Great" from Preljina to Pozega, on the longest tunnel "Laz".

According to him, when the entire highway is completed, it will be possible to get from Belgrade to Montenegro in just two hours and 15 minutes, which will be especially important for the citizens of Arilje, Ivanjica, Sjenica, Novi Pazar and all surrounding places, but also for the citizens of Montenegro.

He also confirmed that the construction of the Nis-Merdare highway will begin in August and that a tender procedure is underway, noting that we received a favourable price and a grant of €40.6 million for a total price of €255 million for the road between Nis and Beloljina.

The section from Preljina to Pozega is 31 km long and is the most demanding on the route to Pozega. Three tunnels will be built on it - "Laz", "Munjino Brdo" and "Trbusani", as well as 35 bridges.

Representatives of the Chinese company informed the President of the Republic that there is a problem with geology, i.e., the terrain in the execution of works on the second tunnel "Munjino brdo".

Chinese Ambassador to Serbia Chen Bo, Director of the "Corridor of Serbia" Aleksandar Antic and Director of "Roads of Serbia" Zoran Drobnjak also attended the tour of the works. 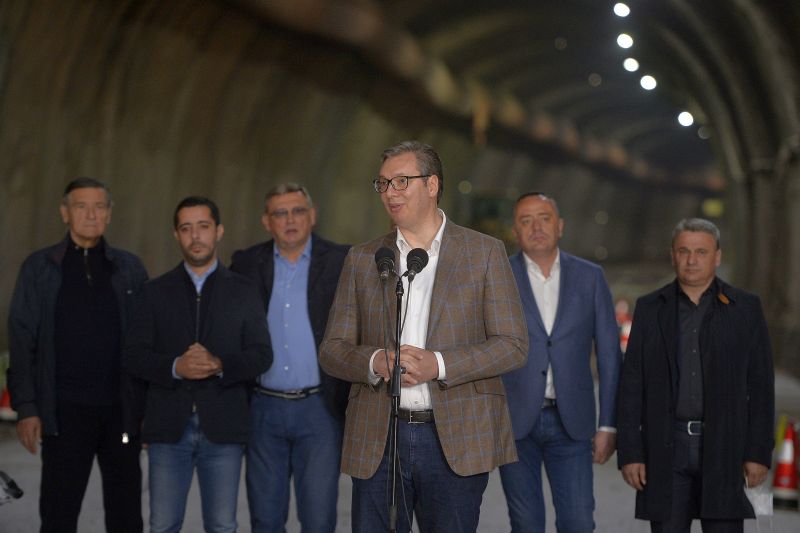