His Holiness Serbian Patriarch Mr. Irinej was buried today in the crypt of the Temple of Saint Sava in Belgrade, after a holy service led by Metropolitan Hrizostom of Dabar-Bosnia.

The coffin with the body was escorted to the tomb by a very small number of people, mostly monks and priests.

The liturgy for the repose of the patriarch began this morning at 9 o'clock. Due to the epidemiological situation, only priests who served the liturgy were in the Temple, as well as state officials and representatives of other religious communities, along with members of the choir.

Before the beginning of the liturgy, Prime Minister Ana Brnabic and members of the Serbian government, Speaker of the Serbian parliament Ivica Dacic, representatives of the Serbian Army, and a little later President of Serbia Aleksandar Vucic and Chairman of the Presidency of Bosnia-Herzegovina Milorad Dodik arrived at the Temple.

After the funeral service, in the continuation of the liturgy, Metropolitan Hrizostom, President Vucic, Milorad Dodik and the head of the Cathedral Church in Belgrade, Archpriest-Staurophore Petar Lukic, said goodbye to the patriarch.

In his speech, President Vucic said that love was the basis of the faith of the late patriarch, and his Serbia was the one he created himself - a Serbia of peace, a Serbia that understands and brings people together.

Dodik pointed out that in the last 11 years, there has been no joy or sorrow in Republika Srpska where the patriarch was not present, regardless of his obligations.

The earthen remains of the patriarch were lowered into the tomb in the crypt by priests from Belgrade.

In front of the Temple, the believers have been coming from the early morning to pay their last respects to the patriarch, patiently waiting for their turn to enter the Temple.

Serbian Patriarch Irinej is the first head of the Serbian Orthodox Church to be buried in the Temple of Saint Sava. 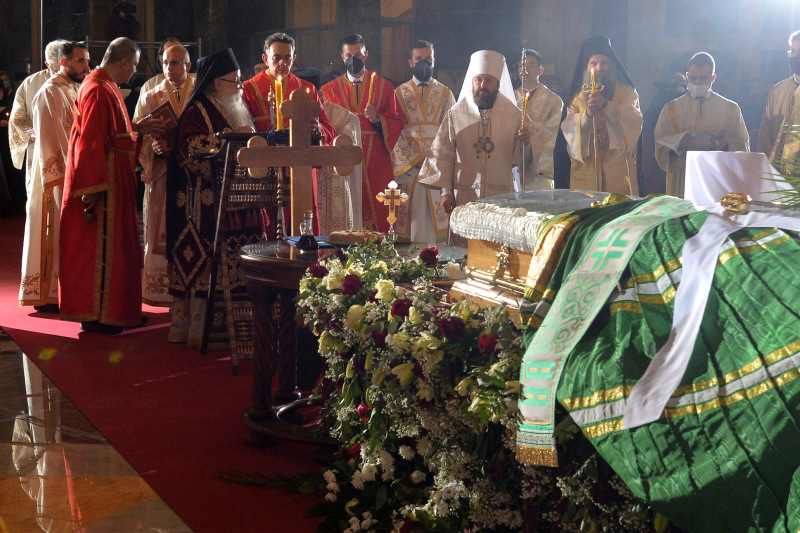