Coordination of activities in combating corruption

Minister of Justice Nikola Selakovic said today that the main objective of the government, the judiciary and all other regulatory authorities is to consistently implement the plan for the fight against corruption, which is contained in the Action Plan for Chapter 23, with the envisaged measures, deadlines and responsible parties. 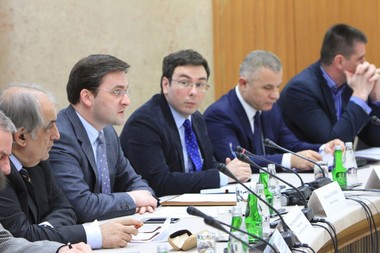 Author: Fonet
At a meeting of the Coordination Body for the implementation of the Action Plan for the Implementation of the National Strategy for Combating Corruption in the Republic of Serbia for the period from 2013 to 2018, Selakovic pointed out that a successful fight against corruption does not only depend on the Ministry of Justice, prosecutor's office or the police, but includes firm and coordinated cooperation of all state bodies, institutions and regulatory bodies.

Selakovic said that one of the implemented measures that is now successfully applied is the Law on the protection of whistleblowers, wheredby Serbia became one of four countries in Europe that have this law.
Share: Twitter Facebook