Minister of Culture and the Media Ivan Tasovac announced today that the International music and film festival Kustendorf will be held on 22-27 January on Mokra Gora and it will include premiers of 17 films of young directors. 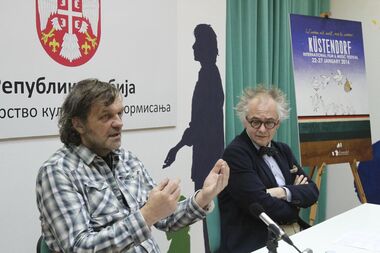 Author: Tanjug
Tasovac said at a press conference that this is a unique event in the world that represents a sentimental trip into the future, and also an opportunity for young movie directors to meet with their idols, prominent film makers.

He noted that Serbia is privileged to have a festival like Kustendorf, and added that 17 movies of young directors from Bulgaria, China, Croatia, Hungary, Iceland, Iran, Mexico, Palestine, Russia, Serbia and Spain will compete for the Golden, Silver and Bronze Egg.

Founder of the Kustendorf festival Emir Kusturica said that this is the most fruitful year for the Serbian film since there are more domestic moves competing at this festival this year than the previous years.

Kusturica added that the best movies will be selected by a jury made up of film producer and author of documentary movies from Ethiopia Maji-Da Abdi, film producer from Argentina Jose Ibanez and a third member who will be chosen within the next 24 hours.
Share: Twitter Facebook