Serbia ready for opening chapters in negotiations with EU

Prime Minister Aleksandar Vucic said today that Serbia is absolutely ready for the opening of chapters in the negotiations with the EU. 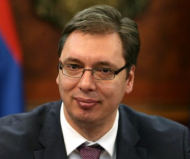 Author: Tanjug
Vucic said in an interview for today's edition of the daily newspaper "Blic" that two years after the formal start of accession negotiations with the EU, Serbia will open tomorrow the first two chapters - Chapter 32 dealing with financial control and Chapter 35 dealing with the normalisation of relations between Belgrade and Pristina.

Pointing out that an important and great event for Serbia will take place tomorrow, Vucic said that by opening chapters Serbia is starting on the irreversible path towards the EU and thus it clearly shows to what type of society it wants to belong.

The Prime Minister added that the opening of chapters is a significant signal from the Serbian economy and the rule of law.

He pointed out that progress towards the EU is a guarantee of how far Serbia has gone, adding that Serbia's progress is not only monitored by the EU, but also by the United States, Japan and other countries.

This is proof that Serbia is becoming better organised and that it will be better for its citizens, the Prime Minister stated, emphasizing that we will be able to solve internal problems in all areas of society more efficiently.

Asked whether Serbia is ready for chapters 32 and 35, Vucic said that we are ready for Chapter 32 and we expect to close quickly.

As for Chapter 35, the Prime Minister explained that this chapter is very difficult and will last until the end of the process of Serbia's accession to the EU.

It will not be easy, but we are not afraid to work. There are no easy solutions, and our citizens will have to understand that, Vucic said.

He said that he does not want to speak about when Serbia will become an EU member.

I said we can finish our job in the negotiations before the end of 2019. Some other countries managed to do that, we can do it also because we are not weaker than them in anything, the Prime Minister underlined.

According to Vucic, the preparatory process lasted longer because of some previous governments, but also due to our peculiarities relating to Kosovo-Metohija, which other countries do not have.

Our task is to complete everything by 2019 and then the EU will make a decision on whether Serbia can be accepted as its member, Vucic concluded.