Minister without portfolio in charge of European integration Jadranka Joksimovic announced very dynamic work in the coming year regarding the adoption of reform legislation and fulfilling the requirements from chapters 23 and 24, but also the possibility of opening chapters 5, 13, 25 and 26. 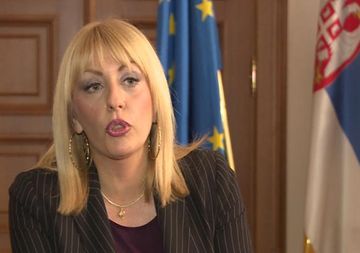 Author: Tanjug
Joksimovic said in a statement to Tanjug news agency that the principle of the EU is that candidate countries for full membership first open the most difficult chapters, which is why chapters 35 and 32 have been opened first, and noted that in the first half of the next year the opening of chapters 23 and 24 should follow.

According to Joksimovic, this includes the adoption of a series of reform laws concerning issues relating to justice and security, such as minority rights, the fight against corruption, drug trafficking and organised crime, gender equality, and an action plan and strategy for the Roma.

These laws carry a variety of changes in the system and it is not enough just to adopt them, it is necessary that the state and society begin to behave in accordance with these laws, she added.

Joksimovic pointed out that regional cooperation is a political precondition for the continuation of the process of European integration, adding that Germany initiated the Berlin process to further strengthen the cooperation between Serbia and countries in the region.

She also emphasised the importance of connecting Serbia with the rest of Europe by building road and energy infrastructure, boosting economic growth and having more relaxed relations in the region.

Joksimovic noted that the citizens of Serbia, regardless of the skepticism that exists towards membership in the European Union, have no reason to fear this process.

On the contrary, we have to set ourselves high goals for ourselves, and then EU membership will only be an added value in the process, she concluded.