Prime Minister Aleksandar Vucic said that our country will always have the strength to cope with the problem of refugees, and added that Serbia will not raise the walls, but will rather take its share of responsibility instead. 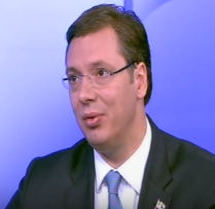 Author: RTS screenshot
Vucic said yesterday in an interview with Radio Television Serbia (RTS) that our country is not included in the quotas that the EU wants to introduce for the distribution of refugees, but that is ready to assume its share of responsibility.

Serbia is grateful to the EU for €60 million in aid after the floods, as well as to the United Arab Emirates (UAE) for €20 million, but we must also be solidary, said Vucic.

He reiterated that Serbia will behave responsibly as if it were a member of the EU, which some countries highly respect, of what he was assured during his visit to Germany, where Serbia's popularity has increased significantly.

German Chancellor Angela Merkel spoke well of our country and is pleased with our behaviour, the Prime Minister said adding that Serbia, when it comes to false asylum seekers, will not lose the status of a safe country of origin.

When it comes to opening negotiating chapters in negotiations between Serbia and the EU, he said that Germany will keep its word, and explained that it means the opening of two chapters by the end of the year.

According to Vucic, Serbia is becoming a serious and responsible country, the only country in Southeast Europe that made tough measures and went forward and did not accept the policy of easy solutions.

In the year after catastrophic floods, the fiscal deficit has been lowered to 1.12%, which is almost unbelievable, he said, adding that it is what the government of Serbia is doing in financial terms with no errors and minuses, although paying huge interest rates. 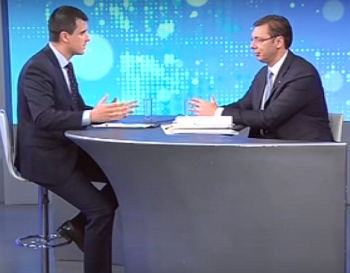 Author: RTS screenshot
At the same time, he recalled that Serbia's debt is 72% of GDP, noting that the number would not be so great that our country has not lost much because of the complicated exchange rate between the dollar and the euro.

The state in its account has more than €296 million, $627 million and RSD 16 billion, which together amounted to about €1.05 billion, which means that Serbia has no problem with liquidity, Vucic said.

Thanks to stability and measures of the government, Serbia will next year record an economic growth of 2%, the low deficit like it is so far, and will have the opportunity to be the most successful in 2017, when growth will go to 3%.

At the same time, the Prime Minister announced that Serbia will continue with the policy of economic and political cooperation, given the fact that our country needs stability in the region above all.

Vucic, who on 15 September travels to Washington, said that that he will meet with US Vice President Joseph Biden and General Director of the International Monetary Fund (IMF) Christine Lagarde.

He expressed gratitude to the citizens for their trust, noting that there will be an increase in salaries and pensions in the public sector, while the private sector will employ a lot more employees.