Prime Minister Aleksandar Vucic and Premier of the People's Republic of China Li Keqiang officially opened today the Pupin bridge, which connects Zemun and Borca across the Danube, together with access roads ten kilometres long. 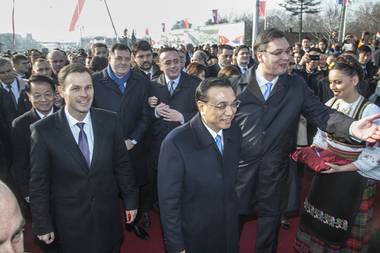 The prime ministers of Serbia and China opened the bridge in the presence of the Mayor of Belgrade Sinisa Mali, Serbian MPs, representatives of political and public life, as well as members of the government and many citizens.

Vucic said that this event is far more important than anything that has been done in the last two days of the Summit of Heads of Government of China and 16 countries in Central and Eastern Europe, due to the fact that this event is about deeds, not words.

Quoting Nobel Prize winner Ivo Andric, he said that of all that a man builds, nothing is more valuable than bridges, they belong to everyone and are equal to all.

He pointed out that it was a great honour for him to open the bridge with the Chinese Premier, as it is the first venture of China in Europe, but also a lasting monument of Serbian-Chinese friendship, noting that the bridge was only the beginning of cooperation.

We will not stop, but we will continue tirelessly to build. In 2016 and 2017 we will finish more railroads and highways than any other European country, Vucic announced.

Serbia will work on a large part of these projects with Chinese investors, Vucic noted.

The bridge across the Danube is not just a building, but a symbol of human desire to connect, he said, adding that the bridge connects the two banks of the Danube, but also Serbia and China and reinforces the two nations in friendship and joint ventures.

Recalling that the bridge was named after the great scientist and inventor Mihajlo Pupin, the Prime Minister said that the Serbian people thus pays tribute to Pupin.

Vucic expressed his gratitude to President of Serbia Tomislav Nikolic for continued support and help in the realisation of the project, as well as the President of Republika Srpska Milorad Dodik, who was always with Serbia during the construction of major infrastructure projects.

He recalled that the construction contracts were signed several years ago and therefore expressed gratitude to representatives of the former government of Serbia and former mayor of Belgrade Dragan Djilas.

The Prime Minister said that the Pupin bridge is a sign of true friendship and unity among the citizens of China and Serbia.

Let the bridge defy time, Vucic said and concluded with the words, Long live Serbia, long live the friendship of Serbia and China.

Keqiang pointed out that the Pupin bridge is result of cooperation between the two countries and peoples, and announced new infrastructure projects that will be implemented in accordance with all European standards.

He recalled that during the construction of the bridge, the Chinese equipment as well as workers from Serbia and China were used.

During his three-day stay in Belgrade, China and the Serbian government signed several documents, including a memorandum on the modernisation of the railway Belgrade-Budapest, said Keqiang, noting that this project will be completed in two years.

According to him, the Chinese side is willing to cooperate in the area of infrastructure.

He explained that Chinese businessmen will be encouraged to open their factories and plants along this line that goes further from Belgrade and Budapest.

Looking back at the Third Summit of Heads of China and 16 countries in Central and Eastern Europe, Keqiang said the decision to hold the meeting in Belgrade was a right decision, adding that Serbia will play an important role in the continuation of cooperation "16 + 1".