Works on Corridor 11 to be completed by April 2017

Prime Minister Aleksandar Vucic stated today that 30 April 2017 is the deadline for the completion of the road section Obrenovac–Ub and Lajkovac–Ljig, and voiced hope that there will be no delays in the performance of construction works. 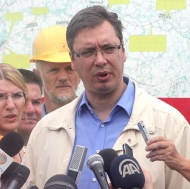 Aleksandar Vucic
After visiting the aforementioned section of Corridor 11 together with Deputy Prime Minister and Minister of Construction, Transport and Infrastructure Zorana Mihajlovic, Minister of Labour, Employment, Veteran and Social Affairs Aleksandar Vulin and Chinese Ambassador to Serbia Li Manchang, Vucic said that once this project is completed, the trip from Belgrade to Zlatibor will last an hour and a half.

He expressed the hope that our country will be much different in terms of infrastructure in 2017 and said that he asked the Serbian public company Corridors of Serbia and the Chinese company Shandong High-Speed Group to try to complete the works before the deadline, which is by the end of 2016.

He said that all building permits for this section have been issued, with less than 5% of the land for expropriation remaining to be resolved.

At the same time, the Prime Minister announced that on September 10 he will travel to Beijing, where several important agreements between Serbia and China will be signed.

Vucic said that he spoke about that with the Ambassador of China to Serbia and about the preparation of several important contracts owing to which our country should become stronger, more powerful and more important in terms of infrastructure.

Manchang said that the Serbian government is diligent, efficient, capable and responsible and, therefore, the Chinese side should also respect all deadlines.

He announced that Shandong High-Speed Group , which is working on this project, will become one of the Fortune 500 in this field, adding that this is a leading company in China in the construction of highways.